Mitchell-Innes & Nash and Annely Juda Fine Art are pleased to announce a solo presentation of works on paper by Leon Kossoff.  The exhibition will include 53 works (a combination of etchings and drawings) made after paintings by some of the Old Masters of Western art: Cezanne, Goya, Poussin, Rembrandt, Titian, and Veronese among them. Kossoff’s drawings were made when masterpieces by these artists were in London for exhibition, either at the National Gallery, the Royal Academy, or other London institutions. They not only recreate the experience of encountering these paintings, but revivify it with their bold and passionate lines.

The drawings selected for this exhibition span several decades, from the 1970s through the 1990s, and will be on view at Frieze Masters, from October 15 through 19, 2014. Kossoff’s habit was to visit museums in the early morning, making use of the privilege granted to distinguished artists to draw in certain galleries before they opened to the public for the day. Using black, grey, and colored chalk on large sheets of paper, he would study his chosen works by making repeated drawings, rapidly absorbing the composition, the light, the space, and the relationship between his drawing and the original work. The drawings create a connection that spans centuries, creating a correspondence and a continuity between the past and the present.

This unique presentation highlights Kossoff’s practice of selecting some of the most singular images in the Western canon and transforming them in his own style. From Titian’s Flaying of Marsyas to Poussin’s Rape of the Sabines to Cezanne’s Murder, many of the paintings Kossoff chose to draw herald alarm, their energy caught in the compressed dynamism of the drawing.

Other works, including a remarkable series from Goya, show Kossoff’s range and subtlety. Two drawings based on Goya’s depictions of the feast of San Isidro, and two depicting the Sierra de Tardienta, are full of light and air—Kossoff interprets the Spanish landscape with touches of pale blue and ochre.

In other Kossoff drawings of Goya paintings, action dominates: the flagellants stampede around a figure of the Virgin, their pointed hats and belted robes creating a frenzied forcefield; the madmen ape and parrot the pretensions of those who have shut them away. These powerful drawings constitute just one aspect of Kossoff’s work, testimony to the enquiry and interrogation that underpins his entire oeuvre, and the dialogue with the Old Masters that has nourished him throughout his career.

The exhibition will be accompanied by a fully illustrated catalogue with an essay by Andrea Rose, Director of Visual Arts, British Council, and curator of Kossoff’s exhibition at the 1995 Venice Biennale. 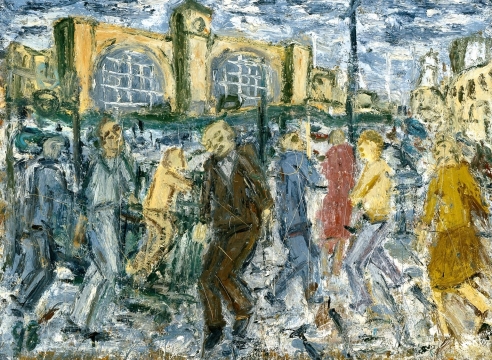