Lights in the Woods

Transition to Blue, Red and Green

Mitchell-Innes & Nash is pleased to present Julian Stanczak: Seriality, an exhibition of paintings by Julian Stanczak looking specifically at the artist’s engagement with the concept of working in series.  This exhibition is the gallery’s third solo show with the artist and the second since his death in March, 2017 and will be comprised of 10 large-scale paintings (ranging in date from 1970 to 2014) many seen in New York for the first time.

Many thoughts stimulate many solutions. It is like walking in the woods without a path: you make a path, but then on the way you find multiple possibilities, challenges, detours and solutions.

The repetitiveness of intervals- the space between actions- units to pause and to reflect, represents the rhythm of existence… Since the activity of life is suspended in time, so the moments of reflection are temporal stops.

I like this idea- it makes me aware of the inexhaustible variants one is experiencing in the moment, from here to there, in time. My fascination with that phenomenon has always been present.

Every time I would complete one painting, it would immediately call for “siblings” to accompany it. It seems to get lonely. It does not want to be terminal, conclusive, but longs for further extension of life.

Working in series is a concept most commonly associated with Pop art (Andy Warhol’s soup cans) or Minimalism (Donald Judd’s boxes) but rarely examined in artists of the Op period which evolved during the same decades.  Stanczak is perhaps unique among his Op peers in that he explored seriality with greater depth and dedication creating variations on the theme throughout his career.  By engaging with this significant concept, Stanczak was able to bring a sense of the organic to the precise systems of Minimalism and emotional range to Pop’s ironic isolation.  The exhibition at Mitchell-Innes & Nash seeks to reveal a new thread to the dialogue of this important period of American art.

Working in series allowed the greatest expression of the artist’s interest in color relationships and scale as a way to abstractly translate into painting the effects of natural phenomena, weather systems and the passage of time.  By using an analytical process, the artist unlocks the potential within his perceptual artistic choices.

In works such as “Filtering Out 1, 2, 3, 4, 5,” 1980 and the monumental “Change With Light,” 1989, Stanczak depicts the meditative and complex cycle of sunrise to sunset or the changing of seasons.

The exhibition will also include large-scale examples of Stanczak’s celebrated Constellation works (such as “Complementaries Yellow,” 2007 and “Lights in the Woods,” 2014) his late multi-panel painting grids in which shifts in color or composition (or both) create a harmonic overall effect when grouped together. 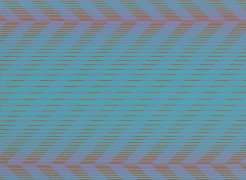 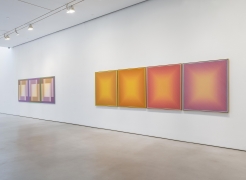