From June 7 through July 9, 2016, Mitchell-Innes & Nash will hand over the gallery space to The Temporary Office of Urban Disturbances, an autonomous group formed in May 2016.  The Temporary Office of Urban Disturbances presents If you can’t afford to live here, mo-o-ove!!, an exhibition expanding upon the living archive of artist Martha Rosler’s landmark three-show cycle entitled If You Lived Here…, first shown at the Dia Art Foundation in 1989. The present exhibition draws upon the rich documentary history of If You Lived Here… but will focus primarily on urgent questions of city life today.  The Temporary Office of Urban Disturbances will host four town hall discussions throughout the course of the exhibition, on June 14, 16, 21, and 23 from 6 to 8 pm.

The three original 1989 exhibitions constituting If You Lived Here… featured a wide range of participants and included a wealth of artworks, films and videos, flyers, books, and other documents. This exhibition will present a selection of original material as well as a series of public panels and discussions examining the increasingly fraught state of affairs for many city dwellers today.

“If You Lived Here…,” was, in Yvonne Rainer’s words, “a vivid demonstration of how an art exhibition can constitute a radically different approach, one that can offer not only a diversity of objects but can contextualize a social field in and from which the objects are produced and derive their meaning. In other words, art exhibition does not have to separate, or isolate, its objects from the conditions in and under which those objects have been produced.”— Yvonne Rainer, “Preface: The Work of Art in the (Imagined) Age of the Unalienated Exhibition,” In If You Lived Here: The City in Art, Theory, and Social Activism, A Project by Martha Rosler (Bay Press, 1991).

The present exhibition, like the initial showing, is structured in three parts: Home Front focuses on tenant struggles and gentrification; Homeless: The Street and Other Venues deals with homelessness, both visible and hidden; and City: Visions and Revisions addresses urbanism and development. The New Foundation Seattle recently presented the first two parts, and Mitchell-Innes & Nash is pleased to make the final part of the cycle possible. With the curatorial assistance of Yoko Ott, and in collaboration with Miguel Robles-Durán, assisted by Daniel Wiley, Sinead Petrasek, Marty Kirchner, and friends, Martha Rosler will present elements of all three parts, with an expanded exploration of contemporary urban conditions constituting the third part, City: Visions and Revisions. A series of town hall discussions dedicated to exploring themes present in the exhibition will take place at Mitchell-Innes & Nash, hosted by The Temporary Office of Urban Disturbances.

*All Town Hall Discussions will be live-streamed on the gallery's Facebook page. 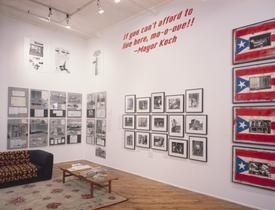 As part of the Artists on Artists Lecture Series at Dia:Chelsea, Andrea Bowers will give a talk on Martha Rolser's exhibtiion If you can't afford to live here, mo-o-ove!! on Tuesday, September 27 at 6:30 pm. 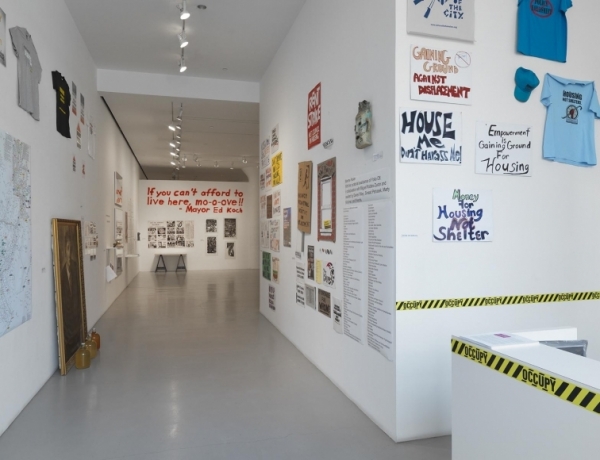 Named after its owners, a couple who formerly worked at the storied auction house Sotheby’s, this sky-lit space hosts a wide range of contemporary artists in shows that change roughly every month. 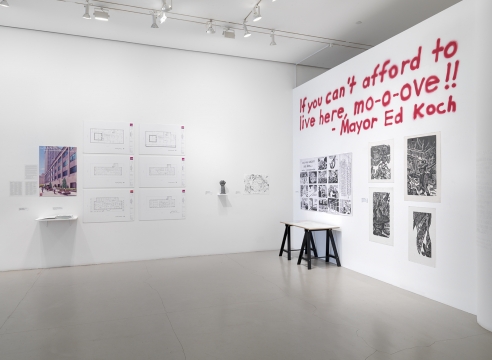 By Seph Rodney
An Archive on Homelessness and the Housing Crisis Brought to Life
Hyperallergic July 1, 2016

Into this fray comes Martha Rosler’s exhibition If you can’t afford to live here, mo-o-ove!!, at Mitchell-Innes & Nash. The title is a quotation from former New York City Mayor Ed Koch, who allegedly said this when confronted about the city’s housing problems. The show is full of umbrage, disillusionment, and rage, but also humor and clear-eyed assessment of the entire suite of difficulties involved in housing. The show is said to be the presentation of the Temporary Office of Urban Disturbances, which sounds like an ad hoc name for the group of curators and artists who have helped Rosler revisit her pioneering project If You Lived Here…. Taking place in 1989, If You Lived Here… examined similar themes and was originally shown at the Dia Art Foundation in three parts; the current project is also divided into three parts, the first two of which were shown at the New Foundation Seattle earlier this year. 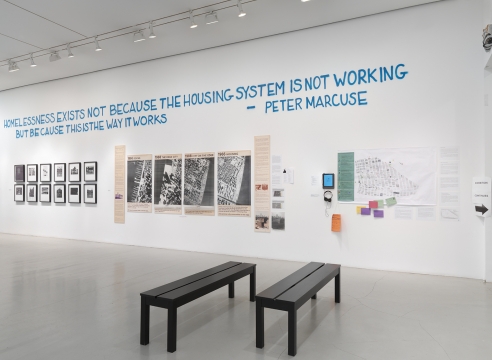 Martha Rosler is known for disrupting the standard exhibition format. She staged a giant garage sale in the atrium of New York’s Museum of Modern Art for her first solo there in 2012. Her current show at Mitchell-Innes & Nash reprises an ambitious project, titled “If You Lived Here,” at New York’s Dia Art Foundation in 1989. Each show in the series of three explored one issue—tenant struggles, homelessness, urban planning—presenting works by artists, filmmakers, squatters, children, and community groups, among others.

For this exhibition, which contains a section on each of the original themes, Rosler has subsumed herself under the name Temporary Office for Urban Disturbances to collaborate with scores of groups—such as 596 Acres, Inc., Center for Urban Pedagogy, New York City Community Land Initiative—and individuals, including LaToya Ruby Frazier, Gregory Sholette, and Robbie Conal. In addition to the dense hanging of artworks, posters, and other archival materials, along with an area to read books and watch videos, the exhibition features four town-hall discussions to examine pressing concerns about city life now.