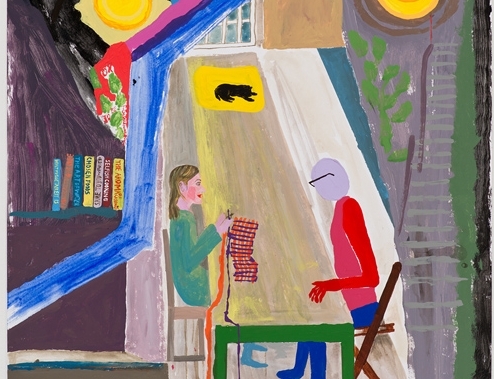 Los Angeles—The Museum of Contemporary Art presents Within The River of Time Is My Mind, a new exhibition by Los Angeles-based artist Chris Johanson on view at MOCA Pacific Design

Center from June 29 through September 22, 2013. Organized by guest curator Andrew Berardini, the exhibition features new paintings, sculpture, and found wood site-specific installation. Known for his figurative work that features text, the exhibition will highlight the kaleidoscopic color and angles that Johanson employs.
Johanson's works often feel home-made and human-scaled, drawn, painted, and crafted with an economy that is neither naive nor necessarily simple, though they may often appear so. There is an underlying emotional complexity that translates into the distinct spirit of his wavering brushstrokes and euphoric abstractions. Johanson’s roughly hewn and self-schooled figures communicate ideas that are at once deeply philosophical and quotidian.

Johanson's visions transmit a distinctly Californian experience that includes a mélange of shamans and charlatans, working stiffs and aimless drifters. Some of Johanson's words and compositions feel like heirlooms from a long and ragtag coastal tradition of poets, artists, and musicians: Wallace Berman's mystical photocopies and seminal Semina culture; the poem-paintings of Kenneth Patchen; the beaming peacenik posters of Sister Corita Kent; the blurring between art and life embodied by Allan Kaprow (the subject of a 2008 MOCA retrospective); all filtered through the dirty socks of punk and the wondrous messy freedom that tumbled out of that. In the work of Chris Johanson, the ordinary and the ecstatic coalesce with candor and grace.

Johanson describes his exhibition at MOCA below in his own words:

The exhibit is a found wood installation
Will continue and connect the two floors
The theme is the personal river of life connected to the greater river of life
Found wood painted to look like a river
The wood traverses, is connected throughout the space
Also included in the show are paintings of suns over shapes painted like the ocean
Are the suns setting or rising
Only the viewer really knows
Also included in the space are exterior and interior paintings of homes at night
They are included because nighttime is a very good part of the cycle of a day
Letting everything recede into less importance
Yin energy restorative night replenishing your life and preparing you for death
Also included are what appear to be carelessly made multi colored window paintings (that the continual
river installation sometimes intersects)
They are not careless, they are carefully carelessly careful to talk about not worrying about what it
means to be alive
There is also a large rectangular cube type shape that the viewer can approach, pick up a ball and place
on top of and watch the ball slowly go toward the center of the top of rectangle
Why should anyone do that?
It is an exercise in filling up time with actions
I was told on several occasions that filling up time with activities could make a person feel good
Repetitive activities like painting houses or paintings is good for brain chemistry
For creating serotonin
There will be repetitive round aspects to the art in exhibit
Round energy is real
What you do makes who you are some say
Makes what is some say
I have been pondering a version of some of the elements of this show (piece for quite some time)
All the work I have done in my life formulates to make this happen

Within the River of Time Is My Mind coincides with the release of Chris Johanson, the latest monograph in Phaidon’s celebrated Contemporary Artists series. The fully-illustrated 160-page book features essays by independent curator and writer Bob Nickas; artist, writer, and curator Corrina Peipon; and Executive Director of Harpo Foundation Julie Deamer.

Chris Johanson was born in San Jose, California in 1968. Emerging from the rich cultural milieu surrounding San Francisco in the 1990s, he gained widespread attention for his participation in the 2002 Whitney Biennial. Johanson has exhibited widely in museums and galleries internationally over the past decade. He has had solo exhibitions at museums including the Malmö Konsthall, 2011; Portland Art Museum, 2007; San Francisco Museum of Modern Art, 2003; and the UCLA Hammer Museum, 2001. His notable group exhibitions include Dialogue of Hands, Glasgow International 2012; A New York Minute, Depart Foundation, Rome, Italy; the 2006 Berlin Biennale, Germany; the 2005 Istanbul Biennial, Turkey; Monuments for the USA, CCA Wattis Institute, San Francisco; Beautiful Losers: Contemporary Art and Street Culture, Contemporary Arts Center, Cincinnati and Orange County Museum of Art, Newport Beach, CA. Johanson is also the founder of the Quiet Music Festival in Portland, Oregon.

Download PDF
Chris Johanson: Within The River of Time Is My Mind 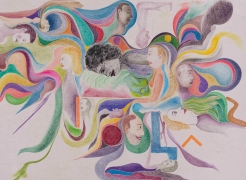