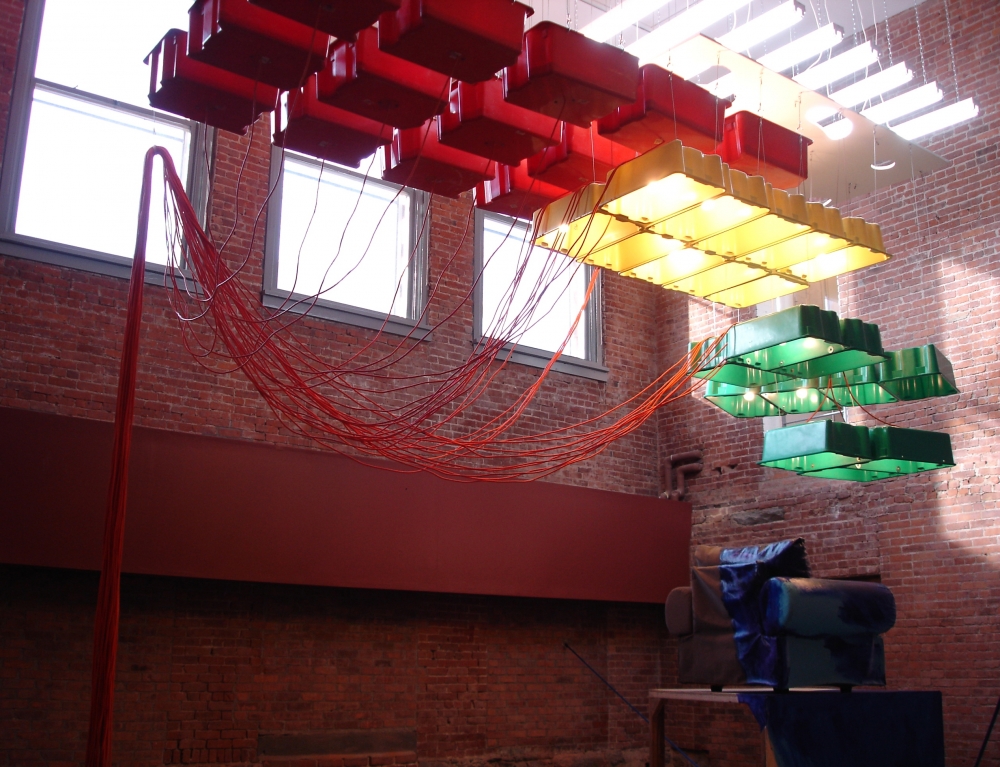 EXHIBITION PRESS RELEASE JESSICA STOCKHOLDER: OF STANDING FLOAT ROOTS IN THIN AIR February 2, 2006 through May 1, 2006 P.S.1 Opening Day Celebration: February 26, 2006 from noon to 6 (Long Island City, New York – January 20, 2006) P.S.1 Contemporary Art Center is pleased to present a new solo project by Jessica Stockholder, her second presentation at the museum. Utilizing mass-produced objects and found materials, she will create a large-scale sculpture for P.S.1's two-story duplex gallery. 'Jessica Stockholder: Of Standing Float Roots in Thin Air' is on view from February 2 through May 1, 2006. Employing everyday goods such as plastic bags and containers, extension cords, lumber, plywood, carpets and furniture, Stockholder draws attention to the aesthetic qualities of these often overlooked items while avoiding overt symbolism and narrative storytelling. With deliberate placement and the eye of a master colorist, she maps out a constructed world informed by numerous artistic traditions, including abstract expressionism, color field painting, installation, and minimalism. For P.S.1, Stockholder will create a composition incorporating fabric and household furniture illuminated by a configuration of plastic tubs and light bulbs suspended from the ceiling. Viewable from above, the sculpture alludes to a theatrical stage where the artist has enacted her work. Jessica Stockholder (b. 1959) is Director of Graduate Studies in Sculpture at Yale University. Her work has been exhibited internationally, including Dia Center for the Arts and Whitney Museum of American Art, New York; 47th Venice Biennale in 1997; and currently at Kunsthallen Brandts Klaedefabrik, Odense, Denmark. She was born in Seattle and brought up in Vancouver, British Columbia. She currently lives and works in New Haven, CT. Jessica Stockholder was a P.S.1 studio artist from 1988 to 1989. Her work, Making a Clean Edge, was part of a group show featuring studio artists in 1989. 'Jessica Stockholder: Of Standing Float Roots in Thin Air' is curated by P.S.1 Director Alanna Heiss. Exhibitions at P.S.1 are made possible by the Annual Exhibition Fund with support from Peter Norton and the Peter Norton Family Foundation, Patricia Phelps de Cisneros, JerryI. Speyer and Katherine G. Farley, The Goldsmith Foundation, Gerrit and Sydie Lansing, Kathleen and Richard S. Fuld, Jr., David Teiger, Michel Zaleski, Christopher Dalyand Sheldrake Organization Inc., Sue & Edgar Wachenheim Foundation, The Broad Art Foundation, Dennis W. LaBarre, Lawton W. Fitt, L. Matthew Quigley & Elizabeth Quigley, Mathis-Pfohl Foundation, Silver Cup Studios, Brandon Paul Coburn, Sholom & Zuckerbrot Realty LLC, Yellow Book U.S.A. and The Friends of Education in honor of Peter Norton and Gwen Adams and The Junior Associates of The Museum of Modern Art. P.S.1 Contemporary Art Center Background: P.S.1 was founded in 1971 by Alanna Heiss as The Institute of Art and Urban Resources Inc., a non-profit organization dedicated to the organization of contemporary art exhibitions in abandoned or under utilized buildings. P.S.1 became an affiliate of The Museum of Modern Art in 2000 and now operates two internationallyacclaimed spaces for contemporary art: P.S.1 in Long Island City, featuring museum-quality galleries, and The Clocktower Gallery, which now contains the radio studio for P.S.1's online radio station WPS1. P.S.1 is one of the largest and oldest arts organizations in the United States solely devoted to contemporary art. Recognized as a defining force of the alternative space movement, P.S.1 stands out from major arts institutions in its cutting edge approach to exhibitions and direct involvement of artists with in a scholarly framework. P.S.1 acts as an intermediary between the artist and its audience. Functioning as a living and active meeting place for the general public, P.S.1 is a catalyst for ideas, discourses and new trends in contemporary art. With its educational programs, P.S.1 assists the public in understanding art and provides the tools to appreciate contemporary art and its practices. Support: Operations and programs of P.S.1 are supported by the P.S.1 Board of Directors, the New York City Department of Cultural Affairs, The Office of the President of the Borough of Queens, The Council of the City of New York, the National Endowment for the Arts, and the New York State Council on the Arts, a state agency. Additional funding is provided by individuals, foundations and corporate contributions. Directions: P.S.1 Contemporary Art Center is located at 22-25Jackson Avenue at 46th Street in Long Island City, Queens, across the Queensboro Bridge from midtown Manhattan. It is easily accessible by bus and subway. Traveling by subway, visitors should take either the E or V to 23 Street-Ely Avenue (note that the V does not run on weekends); the 7 to 45 Road-Courthouse Square; or the G to Court Square or 21 Street-Van Alst. Visitors may also take the Q67 bus to Jackson and 46th Avenues or the B61 to Jackson Avenue. Hours: P.S.1 is open from 12:00 p.m. to 6:00 p.m., Thursday through Monday. It is closed on Thanksgiving, Christmas and New Years Day. Admission: Admission is a $5.00 suggested donation; $2.00 for students and senior citizens; MoMA members free. WebSites: www.ps1.org www.wps1.org www.moma.org Contact:Yng-RuChen, DirectorofPressandCommunications, press@ps1.orgor718.786.3139