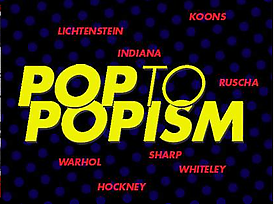 The movement that changed art forever

‘Popular, witty, sexy, glamorous’ – pop art exploded onto the cultural scene in the 1960s. The pop artists rebelled against ‘high art’ to embrace the new world of advertising, television, film stars, pop music and consumerism. Pop art shocked many but inspired even more.

This summer, re-live the pop revolution as Pop to popism takes over the Gallery.

Spanning three decades from the mid 1950s to the 1980s, the exhibition traces the origins of pop art, its heady high period and its enduring legacy both in Australia and abroad. One of our most ambitious exhibitions ever, it will consume an entire Gallery floor and feature over 200 works, including masterpieces such as Roy Lichtenstein’s In the car and his first-ever comic-style painting Look Mickey, Andy Warhol’s Triple Elvis and David Hockney’s Portrait of an artist.

For the first time, Australian artists will be showcased among their international peers, with works such as Howard Arkley’s Triple fronted and Brett Whiteley’s 22-metre-long The American dream celebrating Australia’s pop art movement.

Works have come from 35 lenders around the world including the Andy Warhol Museum, Tate and the Museum of Modern Art.

Immerse yourself in the brash art and radical ideas in Pop to popism with a creative space dedicated to families, an array of programs and a pop-themed café.

Part of the Sydney International Art Series, Pop to popism is exclusive to Sydney.