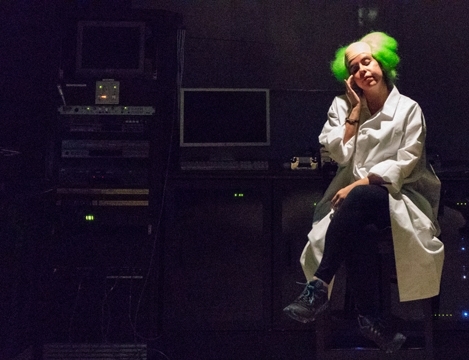 Pope.L’s The Escape is an experimental restaging of one of the earliest extant pieces of African American dramatic literature: the 1858 play The Escape; or, A Leap to Freedom by the abolitionist and freed black slave William Wells Brown. Through comedy and critique, Brown’s story charts the push and pull of sex, power, and black agency on a Southern plantation before the Civil War. Pope.L’s rendition deconstructs and reassembles fragments of the original play, agitating and transfiguring the material in the process.

The 60-minute performance engages and occupies Rubloff Auditorium, in unprecedented and unexpected ways. Four Chicago-based performers and a musician lead a 35-person audience through different overlooked, behind-the-scenes spaces—their characters flickering between past and present. The script and music, devised in collaboration between the artist and the performers, collapse the boundary between fictionalized and autobiographical speech.

As Pope.L has explained, “Brown’s acid sense of humor and his trickster attitude toward whiteness, American letters, and the idea of the literate black Mrs. Gaines has a moment in The Escape workshop, July 13, 2018 produced a text already experimental, already punk and radical.” Pope.L uses Brown’s play “as a fulcrum and a pivot to ask certain piercing, bothersome questions of the text and of our current moment. For example: is the play racist? Does it mean black folk harm with its jokes and ironies? Can a black author make fun of the master, of his own plight, and that of his own people, and contribute to a positive discourse on race relations? And when citizens are made strangers as a matter of course, where are lines of allegiance and alienation drawn?”

Since the 1970s, Pope.L has played with the juncture of absurdity and human-designed definitions. Known in particular for his decades-long “crawl” performances, in which he crawls the length of New York City in short spurts, he is currently based in Chicago and a faculty member at the University of Chicago. His presentation of The Escape at the Art Institute marks the first public performance of the work. 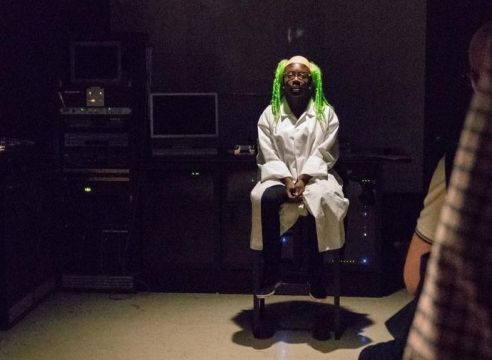 by Steve Johnson
'Pope.L: The Escape' reworks a slavery play as performance art and dares you to wonder what to think about it
Chicago Tribune November 16, 2018

The performance artist Pope.L is asking a lot of Art Institute audiences these days. His “experimental restaging” of a slavery narrative credited as the oldest surviving African-American play moves the few dozen attendees and performers from the bowels of the museum’s Rubloff Auditorium to its sound booth to, in one memorable, pungent moment, its women’s bathroom.