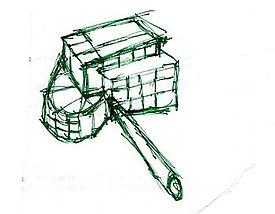 The Carpenter Center for the Visual Arts has commissioned an installation by artist Pope.L that will engage its uniquely modernist structure—famed architect Le Corbusier's only North American building. Pope.L's installation, Corbu Pops, will open on February 19 at 6:00 p.m. with a lecture by Pope.L, followed by a performance piece by the artist and Harvard students. The work takes the Carpenter Center itself as its starting point in an erstwhile investigation of modernism, utopia, nonsense, blackness, purity, and factory production. Such a laundry list of ideas, culled as it is from the bowels of Western civilization, is typical of Pope.L's working method. Paying close attention to the structures and systems that create our built and lived environment, Pope.L's work uses avant-garde strategies such as the readymade, performance, and collage to question the institutionalization of philosophical ideas such as art and the psychic disturbances provoked by industrialization and modernity. In both the performance piece and the installed work, Pope.L will attempt to recast the building (both literally and metaphorically). As Pope.L has said of the Carpenter Center, "As a felt environment, as I moved through the building, around it, and it moved through me, the building 'textures up' like a 'confusing machine,' a machine that manufactures disorientation in the form of a dark viscous liquid. Unlike a washing machine, this machine creates opacities." Further debunking vestigial notions of genius and mastery, the "Corbu Pops" will be not only the pieces Pope.L makes but will also be a set of entertainers, dressed up in "Le Corbusier" outfits, who will perform after the opening night lecture, flirting with the animation of the inanimate (a cross between puppetry and commodity fetishism). These bespectacled entertainers will be a group of Harvard undergraduates chosen to sing and compose, under the tutelage of Pope.L, a dada-esque score of musical "nonsense." The score will be created in part with the kinds of information gathered by the Image of the Black in Western Art Research Project and Photo Archive housed at the W.E.B. Du Bois Institute for African and African American Research at Harvard University. Pope.L studied at the Pratt Institute before receiving his BA at Montclair State College and an MFA at Rutgers University. He participated in an independent study program at the Whitney Museum of American Art and in the Mabou Mines Re.Cher.Chez Theater Intensive in New York. His solo exhibitions include Awesome things you can do with blackness at Kenny Schachter Rove in London, Five Ways to Say the Same Sadness at the University Art Museum at the University of Albany, and the eRacism touring retrospective. He has also participated in group shows at the Museum of Contemporary Art, Los Angeles and has presented performances and "crawls" across the United States, at the Whitney Biennale, and in Tokyo, Madrid, Montreal, and Budapest. Pope.L was awarded a Guggenheim Fellowship, a Rockefeller Multi-Arts Performance Grant, a Japan Artist Residency Fellowship, an NEA Fellowship in Visual Arts, and has been an artist-in-residence on four separate occasions at Yaddo. This show is organized by Helen Molesworth, the Maisie K. and James R. Houghton Curator of Contemporary Art at the Harvard Art Museums. Molesworth has previously organized three shows for the Carpenter Center: in November, 2007 the Felix Gonzalez-Torres candy pour "Untitled" (Placebo – Landscape – for Roni), 1993; in February of 2008 the group show Two or Three Things I Know About Her; and most recently, in November of 2008, Paul Chan: Three Easy Pieces. Corbu Pops is made possible with additional support by the Peter Ivers Visiting Artist Fund through "Learning from Performers," a program of the Office for the Arts at Harvard University, and by the W.E.B. Du Bois Institute for African and African American Research at Harvard University. Pope.L is the 2008-09 Peter Ivers Visiting Artist at the Office for the Arts.