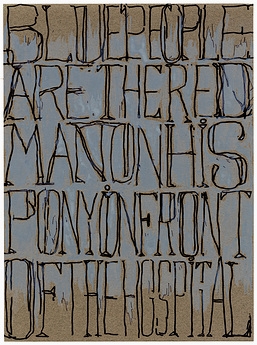 Less Than One is an international, multigenerational group show offering in-depth presentations of work from the 1960s to the present by 16 artists central to the Walker’s collection. Included alongside such signature artworks as Sigmar Polke’s Mrs. Autumn and Her Two Daughters (1991) are major acquisitions on view here for the first time, including Ericka Beckman’s You The Better, Film Installation (1983/2015), Adrian Piper’s The Mythic Being: Sol’s Drawing #1–5 (1974), and Renée Green’s Bequest (1991), among other featured pieces.

The show’s title is drawn from an essay by Russian émigré Joseph Brodsky, whose 1986 collection Less Than One would help him win the Nobel Prize for Literature the following year. His text, which offers a poetic meditation on the nature of human existence and artistic expression, suggests that a person—defined in political and aesthetic terms—is always “less than one.” We can never be a discrete whole at any moment in time, he argues, as we are inextricably tied to past and future selves. This drives the writer and artist to attempt to meet reality through words, images, and an uneasy embrace of artistic personae.