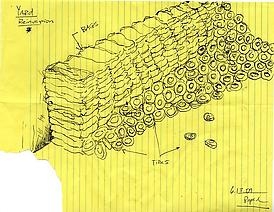 By the late 1950s, American painter Allan Kaprow — formally trained in the era of Abstract Expressionism — began to view the action of Action Painting as far more important than painting itself. With the 1959 work Eighteen Happenings in Six Parts, a series of seemingly random but carefully choreographed activities executed with such friends as composer John Cage and artist Robert Rauschenberg, he embarked upon a career of intellectually rigorous site-specific, impermanent works that defied commoditization and ultimately gave birth to performance and installation art. The inventor of Happenings and Environments, Kaprow joyously incorporated improvisation and public participation within and beyond the traditional museum and gallery context. "Life is much more interesting than art," he wrote. "The line between art and life should be kept as fluid, and perhaps indistinct, as possible." Hauser & Wirth will present Allan Kaprow's seminal Environment Yard, an enduringly influential work — a veritable mountain of black rubber auto tires and tarpaper-wrapped forms through which visitors jumped and crawled — first made by the artist in 1961 and radically reinterpreted in other locations eight times before his death in 2006. Opening to the public on September 23, 2009, the exhibition 'Allan Kaprow YARD' will present a dramatic, sprawling reinvention of Yard by prominent performance artist and interventionist Pope.L at the site of the work's original creation: the Manhattan townhouse at 32 East 69th Street, then home to the legendary Martha Jackson Gallery and soon the address of the new Hauser & Wirth New York gallery.