They dressed the youngest like a boy so pervs wouldn’t hassle her. “Call me Boi,” she bragged. The pervs cruised by with their windows rolled down. “Where’s your Daddy?”

Just her luck to hitch a bum ride. Sometimes a stranger was the only person you could rely on, the only one who would show you genuine kindness. It was almost as though she was doing him a favor. But this broken-down car ruined it and made her want to punch his face.

He liked to imagine himself as the savior in their sad stories, the getaway driver or the social worker with a heart of gold. Not that they were grateful—they rarely thanked him. The sour smell of their unwashed bodies was the first thing to greet him whenever he opened the door.

She squirted long worms of pink soap onto her T-shirt and sloshed it in the sink, making dirty bubbles. It would be better not to have to wear clothes. If they were mermaids, they could be naked and free.

She stomped to flatten the goldenrod and tested it several times for pokers or prickers before reaching to pull the other girl down. Now they could sleep together every night, and the animals could watch them ball.

They lured the pigeon with moldy bread and managed to pluck at least some of its feathers. The stubborn ones gave the dry meat the flavor of burnt hair. Then they sat staring into the flames, their mouths ringed with ash.

Each new car threatened to knock the girls over. The glare of headlights annihilated their features and the blare of horns warped as the cars sped by. Oblivious, they walked the streets and complained about their parents.

They met at the designated spot with supplies. He wasn’t allowed to laugh or even look at them while they sang. Afterward, he would be reborn—a girl, one of them. They would let him choose a new name.

They formed couples, doubling their body heat, and camouflaged themselves into the bramble. The ground smelled of worms loosened by rain and the decaying leaves they used as a bed.

There’s some story about how people once had four legs and two bodies stuck together. They spent all day rolling down hills fucking themselves. The gods punished them, the lesson being: don’t fuck. Still they rolled.

Please click below for the checklist of works on view. 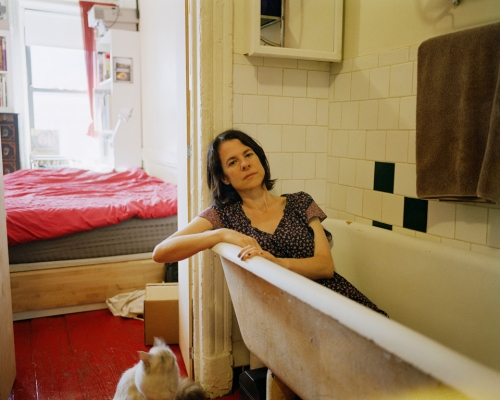 Self-portrait of the artist in her apartment. © Justine Kurland

JUSTINE KURLAND is known for her utopian photographs of American landscapes and the fringe communities, both real and imagined, that inhabit them. Her early work comprises photographs, taken during many cross-country road trips, which reveal the double-edged nature of the American dream. In series such as Golden Dawn (2001-2003) and Mama Babies (2004-2007), Kurland presents a reality where utopia and dystopia are not polar opposites, but rather fold together in an uneasy coexistence. In speaking about her first and, perhaps, most celebrated body of work, Girl Pictures (1997-2002), Kurland describes her practice as navigating “the spectrum between the perfect and the real.” The artist’s most recent body of work, however, eschews her former itinerant lifestyle with pictures that focus instead on the intimate, private spaces of her New York apartment or her mother’s home in rural Virginia.