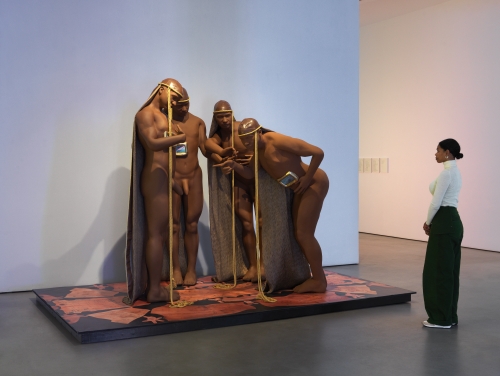 For more than a decade, Jacolby Satterwhite has looked at his mother’s personal archive as gesso on a canvas or a structural technique for a Dada game. Now, stepping out of the digital realm, Satterwhite has turned her drawings of commercial products into sculptures. It is a true collaboration and “it’s my way of getting her out the house,” Satterwhite revealed during an impromptu conversation. In each of the sculptural works, Satterwhite inserts his own hand into his mother’s creations. In “Room for Doubt,” the four figures stand on a sort of futurist Persian rug. Using a flattened UV-map, a tool in CGI software to model realistic, textural elements in 3D, Satterwhite embeds Patricia's drawings as if they're tattoos on flayed skins. Satterwhite’s interest in illness and healing remains as relevant as it was a decade ago when he carried out this gesture as an antibody for a virus, an invisible killer. The wounds in the four figures play clips from an earlier performance in 2010 where Satterwhite demarcates a lengthy print of an infected T-cell by writhing on it covered in red, black, tan and brown acrylic paint.

Excerpt from video displayed in the screens of Room for Doubt, (2019)

In collaboration with The Fabric Workshop and Museum, Philadelphia

In collaboration with The Fabric Workshop and Museum, Philadelphia

“Satterwhite represents a new renaissance (think Bruce Nauman meets the poet Bruce Nugent) in which the dogged soul of Du Bois’s imagination breaks through the “ethnic,” “gender,” and “sexual orientation” glass ceilings toward some unspecified future, as if the black body has finally been unmoored from its historical tethers.” [1] 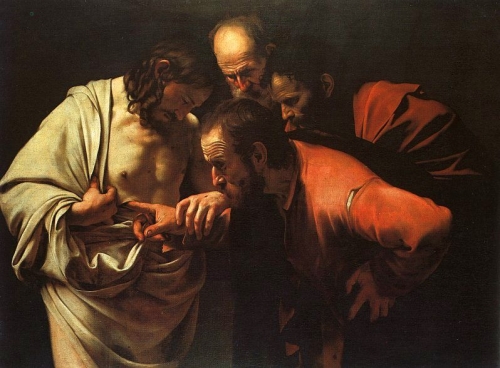 For over a decade, Satterwhite has used 3D animation, sculpture, performance, painting and photography to create fantastical, labyrinthine universes. Here, themes of ritual and allegory are furthered through referential elements that range from art history to video games. The overarching allegory of skepticism central to "Room for Doubt" speaks to the current manifold crises in which we find ourselves. The composition echoes "The Incredulity of Saint Thomas" by Caravaggio (1601-02), which shows Thomas, the apostle who was skeptical of the resurrected Jesus, entering his finger into Jesus’s wound. In Satterwhite's rendition, each of the four figures are made in the likeness of the artist. The purpose of sculpture and object in Satterwhite's practice is critical. They stand to sharpen his understanding of what a painting can be, using an assortment of media to break the fifth dimension. It is here that the artist finds use for the reference of Modernism and historical objects of painting and sculpture. His ongoing questioning of their use in the canon provides for him a stage to reimagine what art can do. 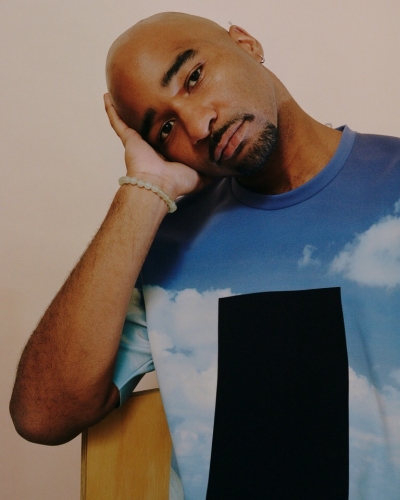 About Jacolby Satterwhite
b. 1986, Columbia, SC

Jacolby Satterwhite is celebrated for a conceptual practice addressing crucial themes of labor, consumption, carnality and fantasy through immersive installation, virtual reality and digital media. He uses a range of software to produce intricately detailed animations and live action film of real and imagined worlds populated by the avatars of artists and friends. These animations serve as the stage on which the artist synthesizes the multiple disciplines that encompass his practice, namely illustration, performance, painting, sculpture, photography and writing. Satterwhite draws from an extensive set of references, guided by queer theory, modernism and video game language to challenge conventions of Western art through a personal and political lens. An equally significant influence is that of his late mother, Patricia Satterwhite, whose ethereal vocals and diagrams for visionary household products and ethereal vocals serve as the source material within a decidedly complex structure of memory and mythology.

Jacolby Satterwhite was born in 1986 in Columbia, South Carolina. He received his BFA from the Maryland Institute College of Arts, Baltimore and his MFA from the University of Pennsylvania, Philadelphia. Satterwhite’s work has been presented in numerous exhibitions both in the United States and in Europe, including most recently at Fabric Workshop & Museum, Philadelphia (2019); Pioneer Works, New York (2019); Whitechapel Gallery, London (2019); the Museum of Modern Art, New York (2019); the Minneapolis Institute of Art (2019); the Museum of Contemporary Art, Chicago (2018); Fondation Louis Vuitton, Paris (2018); New Museum, New York (2017); Public Art Fund, New York (2017); San Francisco Museum of Art, San Francisco (2017); and the Institute of Contemporary Art, Philadelphia (2017). He was awarded the United States Artist Francie Bishop Good & David Horvitz Fellowship in 2016. His work is included in the collections of the Museum of Contemporary Art Kiasma, Helsinki; Museum of Modern Art, New York; Studio Museum in Harlem, New York; and the Whitney Museum of American Art, New York, among others. In 2019, Satterwhite collaborated with Solange Knowles on her visual album, “When I Get Home."