Pope.L is best known for creating scenarios and poetics that confront issues of race, gender, language and community. In the 1970s and 1980s, Pope.L began making Proto-Skin Set, a body of work that introduces the use of language, materiality and absurdity in his practice to construct pointed and layered messages. Preceding his ongoing Skin Set project, Pope.L often uses found substrates to investigate the relationships between language and imagery, sign and signifier and image and object. 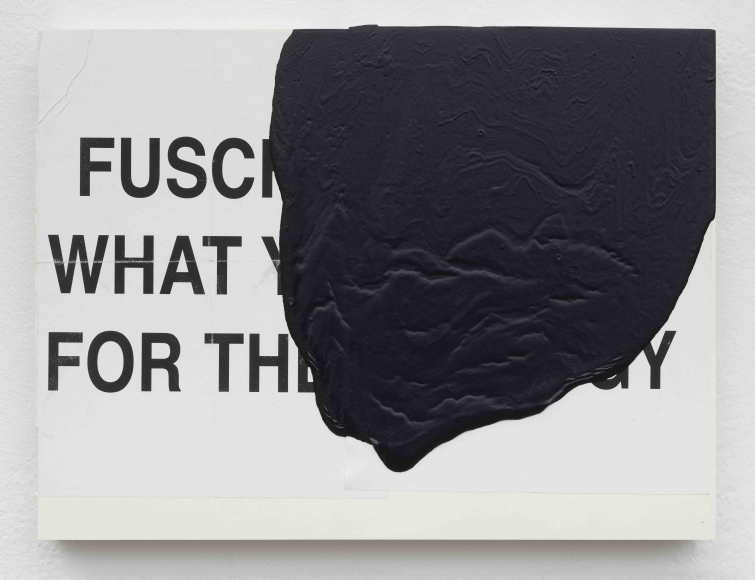 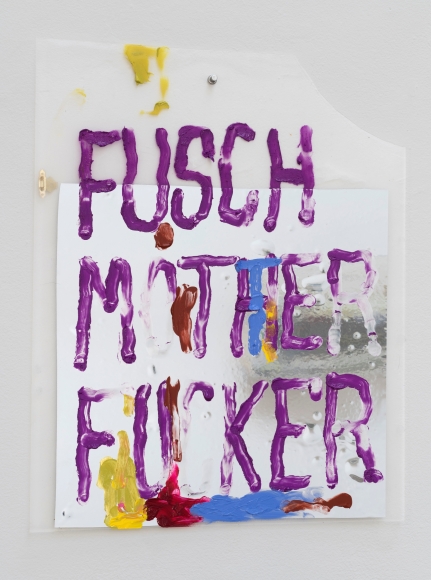 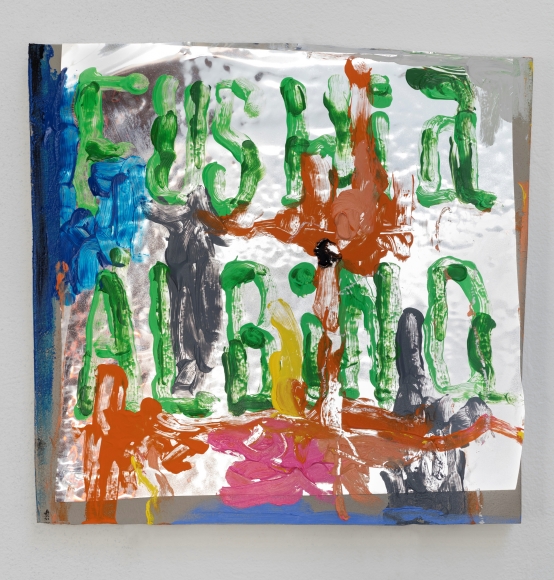 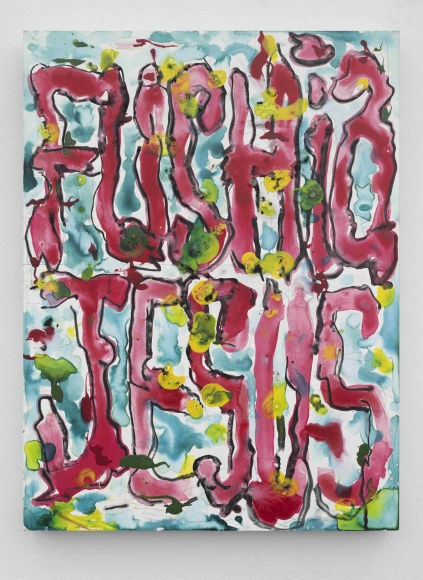 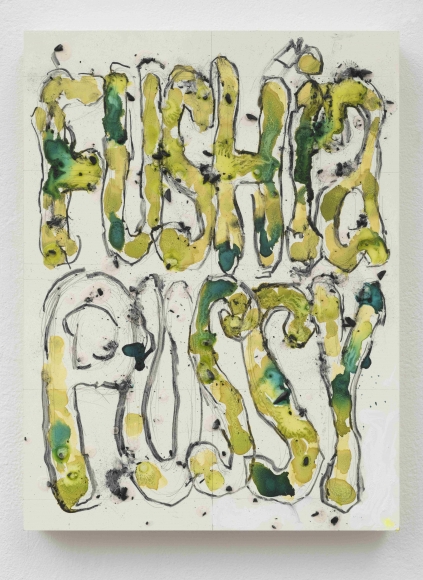 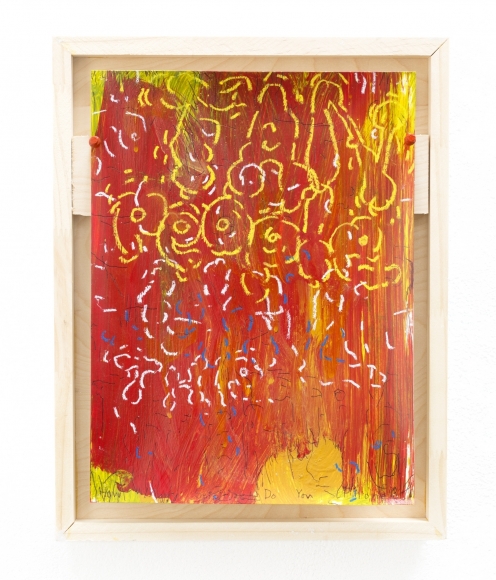 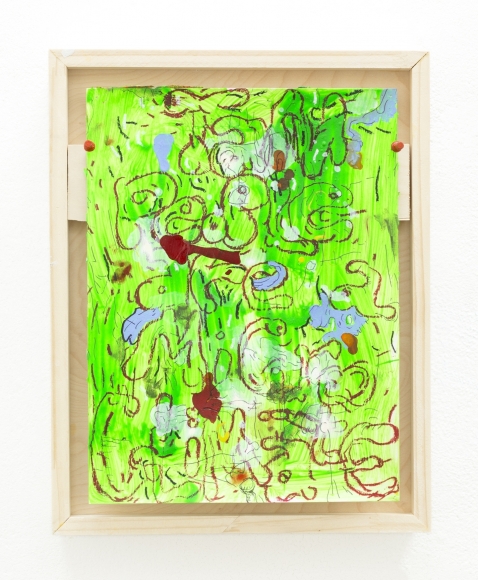 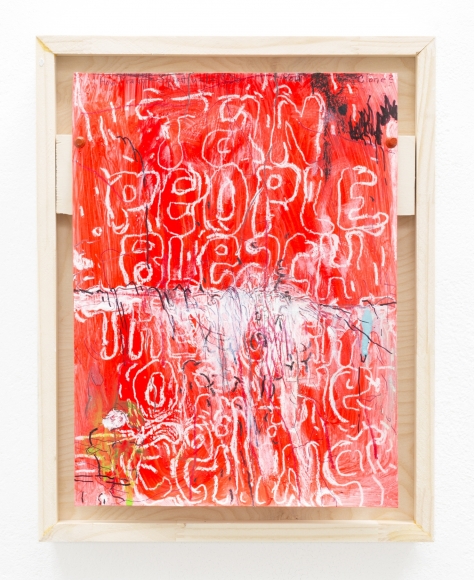 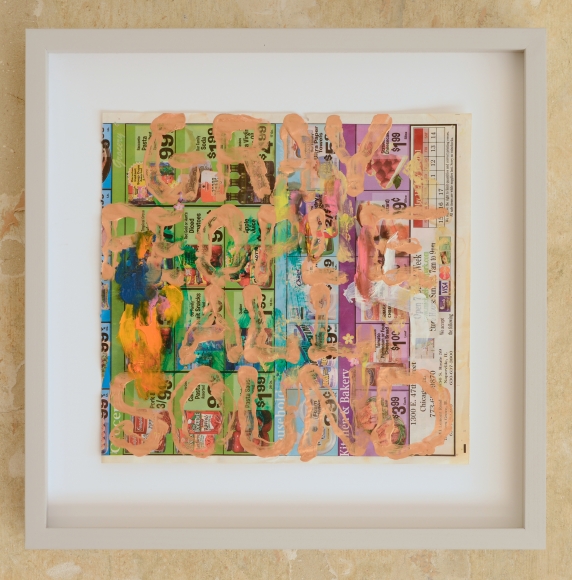 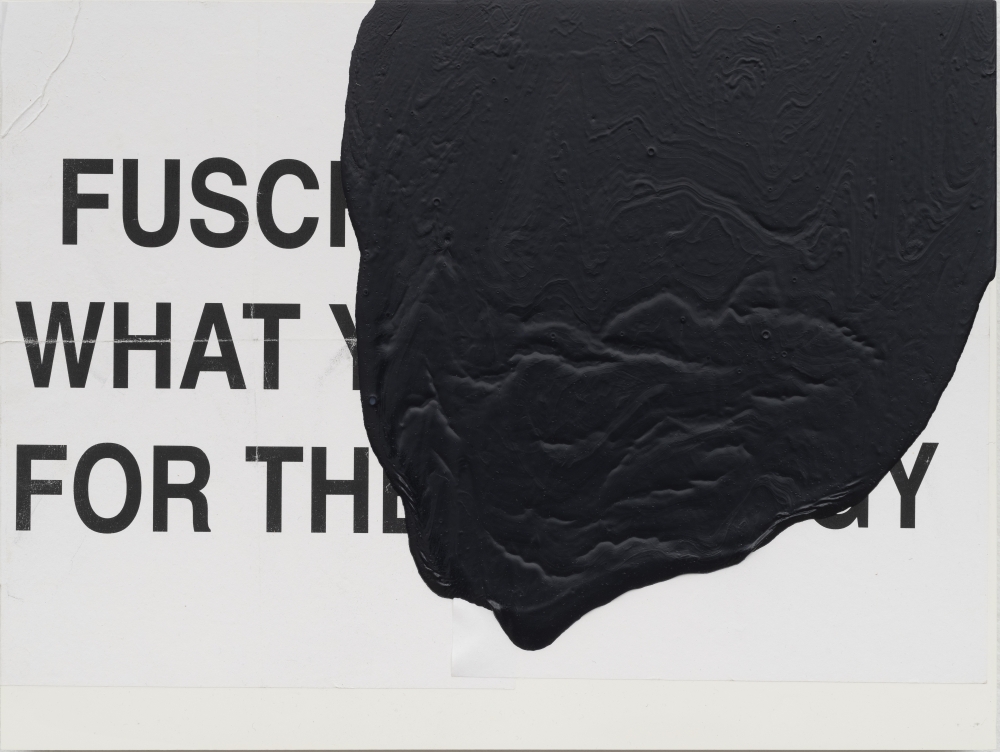 This selection of works focuses on Pope.L’s use of language to tackle the most pressing questions about American society. The artist has emphasized the related conditions of legibility and visibility throughout his career. First started in 1997, his ongoing Skin Set series comprises bold, absurd statements across compositions using a variety of materials. As he points out, these works “are meant to be read even if I sometimes make them very difficult to be read. I use shifting levels of legibility of language to trouble the process of reading….Legibility can be articulated via physical, poetic or conceptual means.”

The auditory nature of the letters and words—their respective tone and structure—becomes more apparent due often to the absurdness of the illegibility. Decoding them encourages the viewer to slow down the process of looking and reflect about the underlying message. “Like a performance,” as Pope.L notes while addressing his performance crawls that similarly address visibility, “writing durates; an act of enduring; [I] want to make it more physical, more ham-fisted lyrical—there are things to be done with words that have nothing to do with paint. It’s like crawling when you can walk….”

Pope.L is a visual artist and educator whose multidisciplinary practice uses binaries, contraries and preconceived notions embedded within contemporary culture to create art works in various formats, for example, writing, painting, performance, installation, video and sculpture. Building upon his long history of enacting arduous, provocative, absurdist performances and interventions in public spaces, Pope.L applies some of the same social, formal and performative strategies to his interests in language, system, gender, race and community. The goals for his work are several: joy, money and uncertainty— not necessarily in that order.

Pope.L began his career in the 1970s, creating works that find their foothold in personal travail, reading philosophy, performance and theatre training with Geoff Hendricks and Mabous Mines. He studied at Pratt Institute and later received his BA from Montclair State College in 1978. He also attended the Independent Study Program at the Whitney Museum of American Art before earning his MFA from Rutgers University in 1981. His first performances occurred on the street and later at major and historic venues, such as Anthology Film Archives, Franklin Furnace, Just Above Midtown, Museum of Modern Art, New Museum, Performa, The Sculpture Center and the 2002 Whitney Biennial in New York; MIT and Mobius in Boston; MOCA Los Angeles; Shinjuku Station in Tokyo; Diverse Works in Houston; Cleveland Institute of Art in Ohio; Baltic Centre for Contemporary Art in Gateshead Quays, UK; Prospect.2 in New Orleans; Walker Art Center in Minneapolis; Museum of Contemporary Art Chicago and Contemporary Arts Museum Houston, among others. Major performances include Dressing Up for Civil Rights (2019-2020); Conquest (2019); Baile (2016); The Problem (2016); Pull (2013); The Black Factory national tour (2002–2009); The Great White Way (2001–2002); Community Crawls (2000–2005); Eating the Wall Street Journal (2000); Black Domestic aka Roach Motel Black (1994); How Much is that Nigger in the Window (1990-1992); Times Square Crawl (1978) and Thunderbird Immolation (1978).

Recent exhibitions, performances and projects include member: Pope.L, 1978–2001 at the Museum of Modern Art, New York (2019-2020); Choir at the Whitney Museum of American Art, New York (2019-2020); One thing after another at La Panacée, Montpellier (2018); Flint Water Project at What Pipeline, Detroit (2017); Whispering Campaign at documenta 14, Athens and Kassel (2017); Claim (Whitney Version) at the 2017 Whitney Biennial (2017); PLAMA (The Spot), a commercial commissioned for On the Tip of the Tongue at Museum of Modern Art Warsaw (2016); Baile at the 32nd Biennal de São Paulo (2016); The Freedom Principle at ICA Philadelphia (2016) and MCA Chicago (2015); The Public Body at Artspace, Sydney (2016); Less than One at Walker Art Center, Minneapolis (2016); Trinket at The Geffen Contemporary, Museum of Contemporary Art, Los Angeles (2015); Black Pulp! at Yale School of Art, New Haven and IPCNY in New York (2016); Radical Presence: Black Performance in Contemporary Art at Walker Art Center, Minneapolis, Contemporary Arts Museum Houston and Studio Museum in New York (2014); Claim at Littman Gallery, Portland State University, Portland, OR (2014); Cage Unrequited at Performa, New York (2013); Forlesen at The Renaissance Society, University of Chicago, Chicago (2013) and A Long White Cloud, Te Tuhi, Auckland, New Zealand (2013).