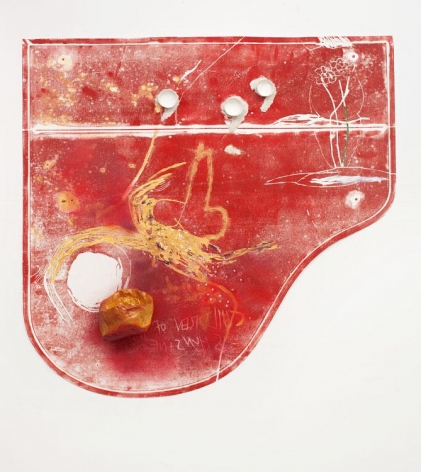 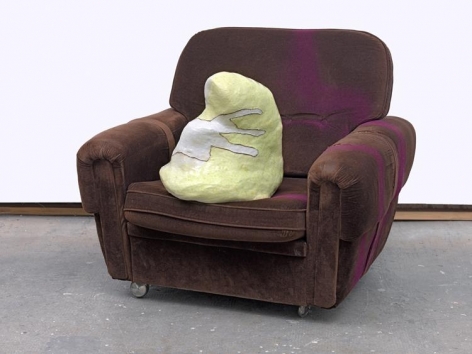 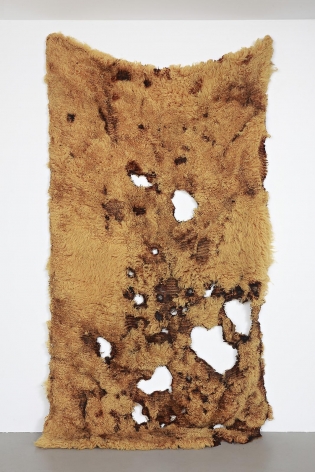 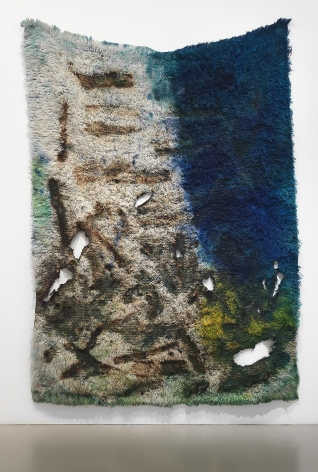 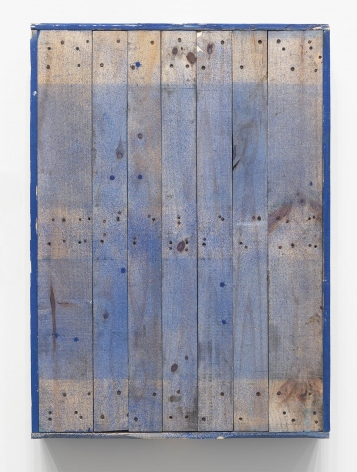 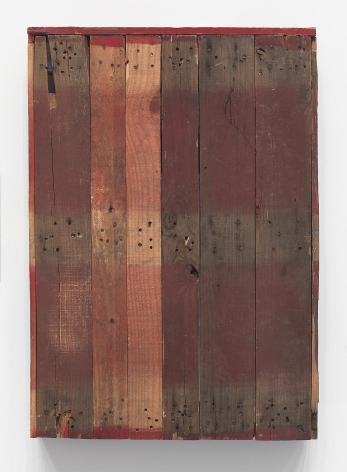 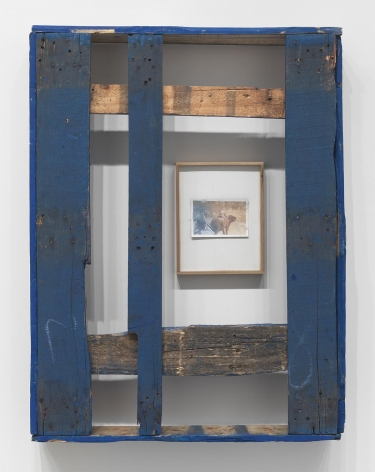 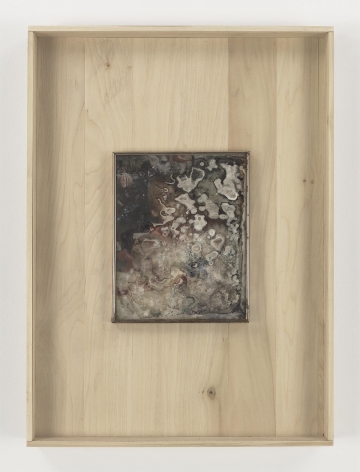 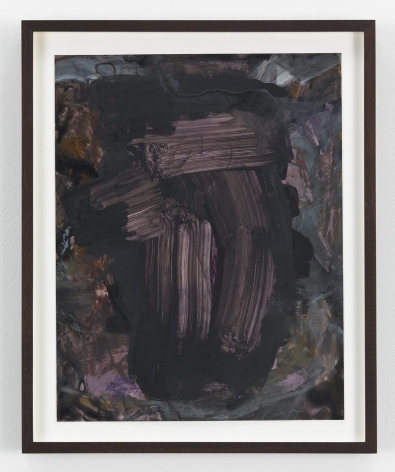 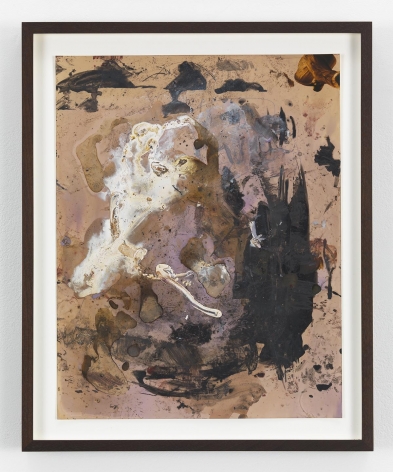 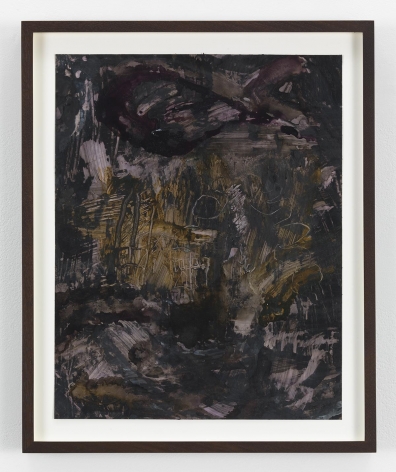 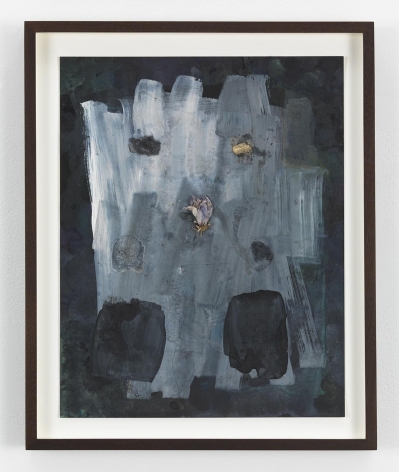 Josef Albers wrote that “the origin of art [is] the discrepancy between physical fact and psychic effect.”1 For these four artists, physical fact is a starting point– from Josh Brand’s reliance on the simple interaction between objects, light and chemicals in the darkroom, to Anna Betbeze’s use of pre-existing shag rugs as ‘canvas;’ from Josh Tonsfeldt’s reconfigured shipping pallets that have traveled through a cargo supply chain, to Jessica Jackson Hutchins’s sculptures with household furniture that has accrued years of wear and tear. Each artist works at the margins of genre, and each allows an element of chance or material history to affect surface, substituting the physical memory of the source material for the deliberate gesture. There is an experimental quality to their work: a mad-scientist approach that yields curious, enigmatic results. Despite their reliance on “givens” from chemical, industrial, or physical processes beyond their control, each of them imbues their work with a peculiarly hand-wrought and human quality.

Josh Brand uses photographic processes to create unique objects that often do not read as photographs. He reworks them with ink and mixed media until their origin in the photographic realm is barely discernible. Anna Betbeze paints – and burns, cuts, and tears – on Flokati rugs. These shaggy, unwieldy surfaces evoke wildness more than domesticity, and Betbeze’s controlled interventions only exaggerate their inherently unruly quality. Jessica Jackson Hutchins also uses domestic objects that take on a new life in her Frankensteinian sculptures. A chair, couch, or piano retains its well-used character, especially when fused with one of Hutchins’s roughly-shaped ceramic vessels and smeared with paint or papier maché. Josh Tonsfeldt’s pallet pieces reveal the marks and painterly variations that develop through time and use within what are meant to be identical, modular objects. Tonsfeldt repositions these objects, at times incorporating additional images, to command sustained attention and invest them with new meaning.

Anna Betbeze lives and works in New York City. She received her BFA from the University of Georgia in 2003 and her MFA from Yale University in 2006. She was the subject of a recent solo show at Mass MoCA in North Adams, Massachusetts, and has been included in group shows in New York, LA, London and Berlin. She is represented by Kate Werble Gallery, New York. Josh Brand lives and works in Brooklyn, New York. He received a BFA in 2002 from The School of The Art Institute of Chicago, where he studied film and photography. He has had solo shows at White Columns in New York, 2007 and Herald St. in London, 2009, and was included in the 2010 Whitney Biennial. Jessica Jackson Hutchins lives and works in Berlin, Germany. She was the focus of solo shows at the ICA Boston and Atlanta Center for Contemporary Art in 2012. She has been included in group exhibitions at museums including the Walker Art Center, Minneapolis in 2009 and the Seattle Art Museum in 2011, as well the 2010 Whitney Biennial. She has a forthcoming solo show at the Hepworth Wakefield Museum.  Josh Tonsfeldt lives and works in Brooklyn, NY. He has had solo exhibitions at Simon Preston gallery, New York, and Franco Soffiantino in Turin, and has shown widely in group exhibitions in the US and Europe, including Proposal for a Floor, Zabludowicz Collection, New York, 2011; Looking Back / The Fifth White Columns Annual, White Columns, NY, 2010; and In Practice, Sculpture Center, Long Island City, New York, NY, 2010. He is represented by Simon Preston.