NEW YORK, January 16, 2015—Mitchell-Innes & Nash is delighted to announce its second exhibition of the work of Nancy Graves from The Nancy Graves Foundation. On the 20th anniversary of her death, the show presents work from the first half of her artistic career, 1969 to 1982, and features painting, drawing, sculpture, and film. Nancy Graves will be on view in the gallery’s Chelsea location (534 West 26th Street) from January 29 to March 7, 2015.

Graves burst onto the international scene in 1969 with a solo exhibition at the Whitney Museum of American Art, followed by her prominent inclusion in Documenta 5 (1972) and Documenta 6 (1977). Graves’s iconic early work used the form of a camel as a starting point from which to test the boundaries of art-making. The larger-than-life, mysterious sculptures are “realistic illusions,” or “natural fictions,” hovering between art and reality, abstraction and figuration.  Sculptures such as Inside-Outside (1970) appear to be a camel skeleton, but closer examination reveals a formidable construction of steel, wax, marble dust, acrylic, fiberglass, animal skin, and oil paint. Graves guides the viewer through her own process of discovery and creation, exploring common themes between scientific documentation, natural history, and fine art.

Graves’s relationship to science and natural history is enigmatic. The large “pointillist” style canvases Camouflage #1 (1971) and Camouflage Series #4 (1971) are based on clippings from natural history books showing fish and crabs blending into the ocean floor. Indian Ocean Floor II (1972) and Frau Mauro Region of the Moon (1972) are based on topographical maps of the ocean floor and moon, respectively. Made possible by scientific advances of the time, satellite images of the moon, earth, and ocean floor could be seen for the first time. Graves used these images as a referent for a seemingly objective form of art-making that explored the unknown. For Graves, the revelations of contemporary scientific research and the excitement of new discoveries were integral to the artist’s artistic practice.

The paintings and watercolors in this exhibition have a decentralized sense of perspective between figure and ground. Graves has said, “I try to force the eye to move from part to whole and back again; to prevent it from focusing, if you will, simply on two or three dimensions.” The large watercolors achieve this effect with luminous color and loose gestures drawn from natural forms.

Also on view on this exhibition are three rarely shown films: Izy Boukir (1970), Reflections on the Moon (1974), and Aves: Magnificent Frigate Bird, Great Flamingo (1973). Izy Boukir was filmed in the Sahara over the course of 18 days and features a score composed by Graves’s friend Philip Glass. The closely framed views of the camels moving through the Saharan landscape reveal Graves’s unique combination of abstraction and naturalism. The films provide an apt lens to consider the first half of Graves’s career as she engages with the conceptual concerns of Minimalism, combining an emphasis on rhythm, repetition, and seriality with her exacting naturalism and curiosity about the natural world.

Nancy Graves (1939 – 1995) is a conceptual artist of international renown, and one of the leading artists of her generation. Her work has been featured in hundreds of notable exhibitions and is the permanent collections of major art museums. Born in Pittsfield Massachusetts in 1939, Graves graduated from Vassar in 1961, and then earned her MFA in painting at Yale in 1964, where her classmates included Robert and Sylvia Mangold, Rackstraw Downes, Janet Fish, Stephen Posen, Brice Marden, Chuck Close, and Richard Serra (whom she was married from 1965 to 1970). Five years after graduating, Graves was the youngest artist, and only the fifth woman given a solo exhibition at the Whitney.

After working intensively in sculpture, Graves returned to painting, and over the next two decades developed a sustained body of innovative, large-scale works that relied less overtly on outside references and increasingly reinterpreted and transmuted forms and motifs sourced from her own earlier work. These richly textured compositions form a layered atemporal archaeology of her own visual production. Parallel to her painting practice, in the 1980s, Graves was among the avant-garde artists pioneering sculpture in the “traditional” medium of bronze casting, and was awarded major public commissions for large-scale, site-specific installations.

All images © 2015 Nancy Graves Foundation, Inc / Licensed by VAGA, New York, NY.  Images may not be reproduced in any form without permission from the foundation. 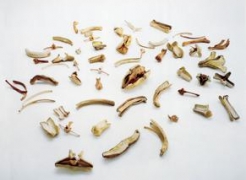 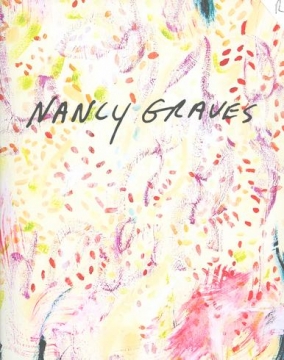 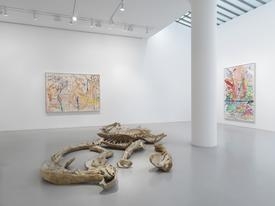 Please join us on Saturday, March 7 at 2 pm, the final day of the Nancy Graves exhibition, for a panel discussion on the life and work of the artist.   Moderated by Lucy Mitchell-Innes, the panelists will include Laura Hoptman, Curator, Department of Painting and Sculpture, The Museum of Modern Art, Christina Hunter, Director, Nancy Graves Foundation, New York, author and critic Christopher Lyon and artist Jessica Stockholder. 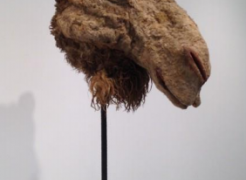 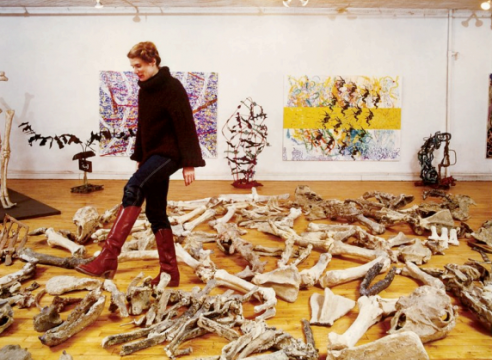 Nancy Graves at Mitchell-Innes & Nash, through March 7
Nancy Graves (1939–1995), was a key figure in the transition from the dominant forms of Minimalism and Conceptualism that marked the late 1960s and '70s, toward a more pluralistic view of art production that became widely embraced in the 1980s and later. This show features a number of strong and rarely exhibited examples from the artist's estate. The image of a camel was central to her work of the 1970s, as part her vocabulary of “realistic illusions" and “natural fictions." Her cryptic camel skeleton sculpture, Inside-Out (1970), made of steel, wax, marble dust, fiberglass, and animal skin, is a highlight of the show. Also on view, projected high on one wall, are a series or early videos, includingIzy Boukir (1970), a film shot in the Sahara, featuring music by Philip Glass. Equally remarkable are her colorful, large-scale paintings from the “Camouflage" series of the 1970s; they prove that Graves was far ahead of her time. 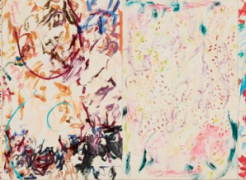 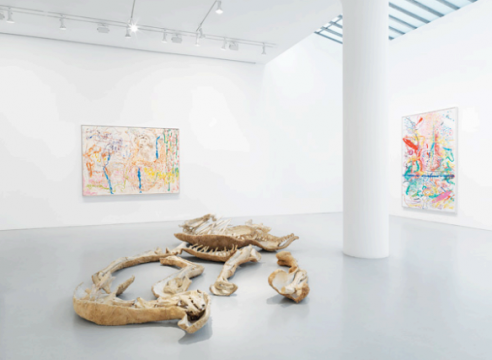 An internationally acclaimed conceptual artist, Graves (1939–1995) has been featured in hundreds of notable exhibitions and her work is in the permanent collections of major art museums. Born in Pittsfield, Massachusetts, Graves earned her MFA in painting at Yale in 1964, where her classmates included Robert and Sylvia Mangold, Brice Marden, Chuck Close, and Richard Serra (to whom she was married from 1965 to 1970).