CHRIS JOHANSON
All On Different Trips

California-native Chris Johanson is a key member of San Francisco’s Mission School.  Johanson engages with the meditative qualities of art-making and sincere direct communication through painting and sculpture.  Johanson’s work plays between the techniques of figuration and abstraction, as he sees these two modes of working as interconnected expressions of strong beliefs in environmentalism, compassion and peaceful co-existence.

Chris Johanson was born in San Jose, California in 1968 and is based in Portland. He has exhibited widely in museums and galleries internationally over the past decade. His work has been the subject of solo shows at the Tang Teaching Museum and Art Gallery in Saratoga Springs, New York (2014); the Portland Museum of Art in Portland, Oregon (2014); LA MoCA Pacific Design Center in Los Angeles, California (2013); and the Modern Institute in Glasgow, United Kingdom (2013).  Johanson has been featured in important group exhibitions including Glasgow International 2012 and the 2002 Whitney Biennial. 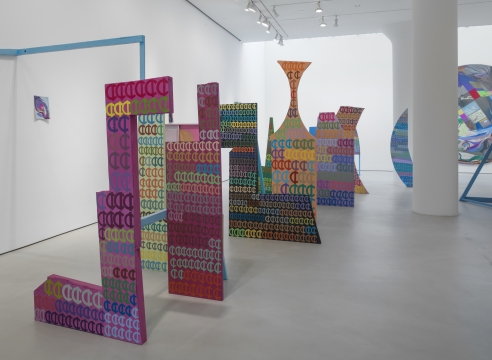 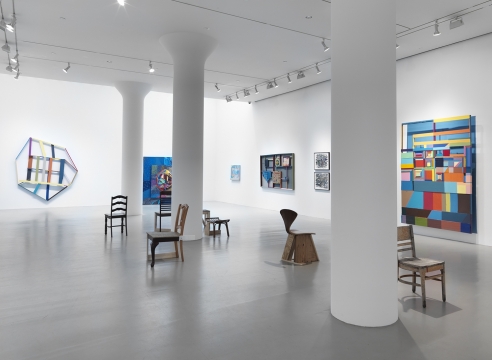 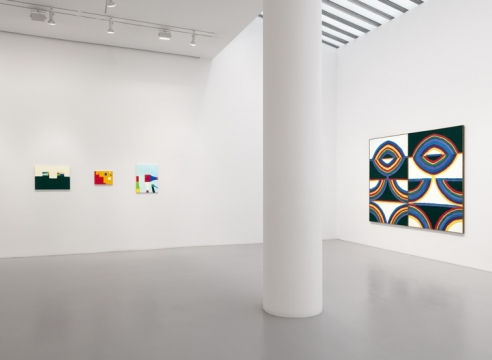 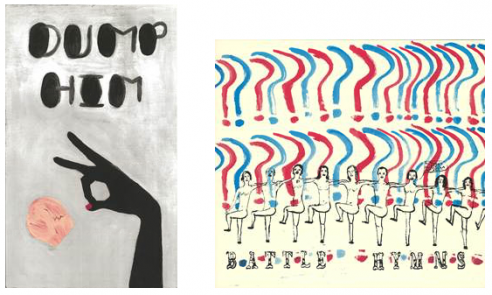 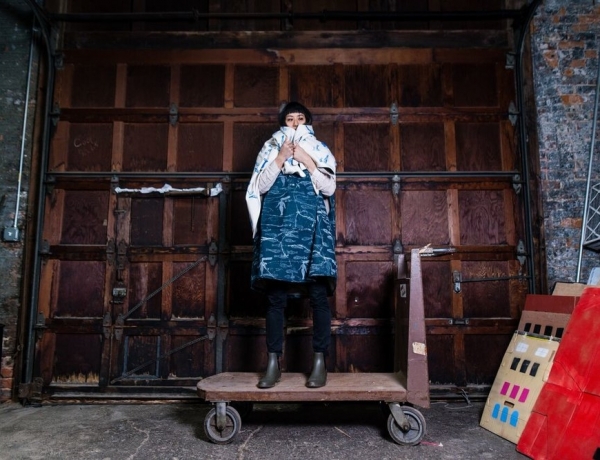 Welcome Editions are limited edition art objects designed by nationally recognized artists and fabricated at least in part by the refugee and immigrant women of the Welcome Project. Chris Johanson and Johanna Jackson have created an edition of 75 woodblock printed denim capes and blankets, along with 50 woodblock prints on paper with the same design.

Kim Hastreiter, Cheryl Dunn, Chris Johanson, Johanna Jackson and Josephine Nash invite you to join us at Mitchell-Innes & Nash on Wednesday, May 16 to purchase an edition. Light refreshments will be served. 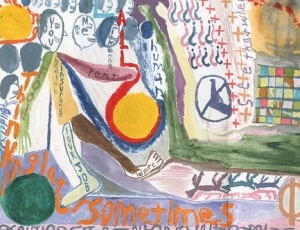 Bid on Sarah Braman, Chris Johanson and Eddie Martinez in the Merge Records Auction. All proceeds benefit the Southern Poverty Law Center and their initiatives to fight hate and bigotry. Along with the original artwork, auction winners will receive an exclusive signed vinyl record by Merge's flagship band Superchunk. 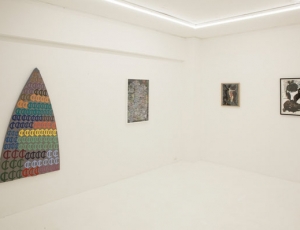 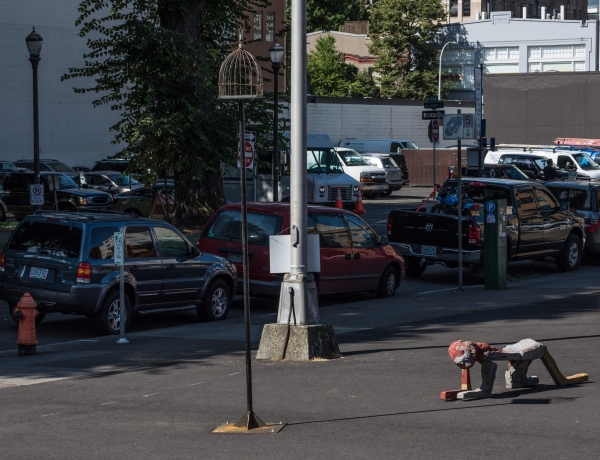 Chris Johanson has contributed a public sculpture to Converge 45's exhibition, YOU IN MIND. 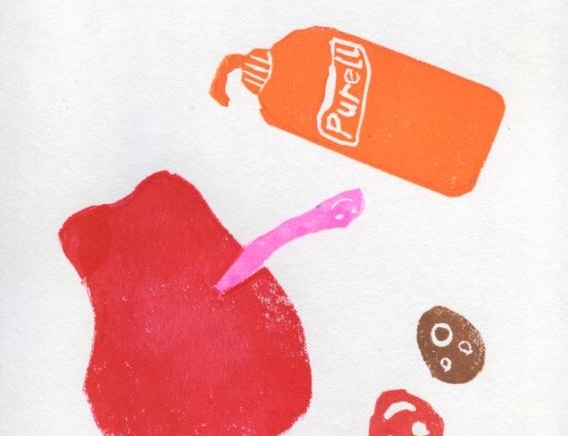 Worms, Birds, People, and Air - The Art of Oh No and Dissociative Thinking

Worms, Birds, People, and Air
The Art of Oh No and Dissociative Thinking
by Chris Johanson 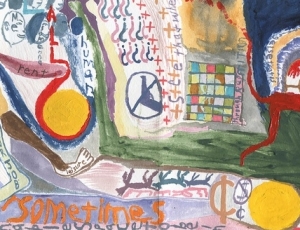 For a special vinyl 7” release to benefit Planned Parenthood, Merge Records and its flagship band Superchunk asked their favorite contemporary artists including Joyce Pensato, Brian Calvin, and Amy Sillman to create unique works of art the size of a 7” record sleeve. Along with the original art, auction winners receive an exclusive pink swirl vinyl edition of the record. All net proceeds will be donated to Planned Parenthood South Atlantic. Please note this auction charges a 20% buyers premium. 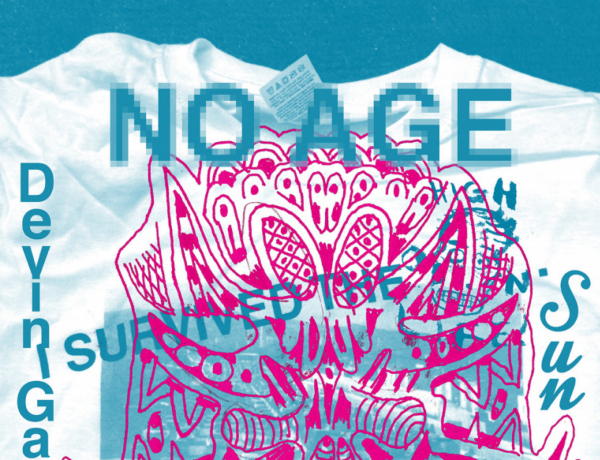 Generationalpictomusicapolis is a celebration of collaborative music and art-making. This one night only concert and pop-up exhibition features experimental punk from NO AGE (Randy Randall and Dean Spunt), the barely amplified feel-good vibes of SUN FOOT (Ron Burns,Chris Johanson, Brian Mumford) and the ramshackle psych-folk of DEVIN, GARY & ROSS (Devin Flynn, Gary Panter, Ross Goldstein. Limited-edition, collaboratively made artworks created by each band member are exhibited at the show and are available for purchase. 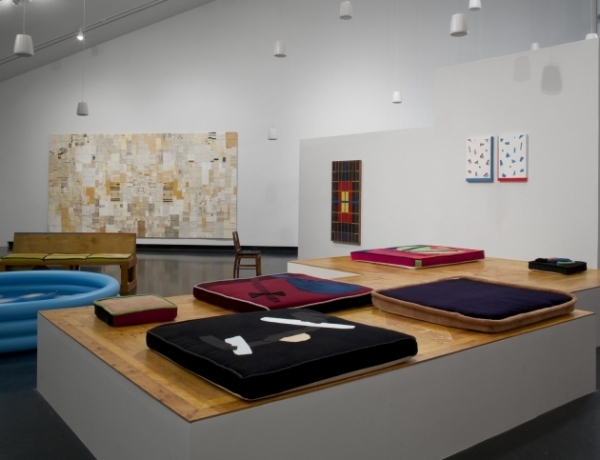 Chris Johanson at the Tang Museum

I was a double

Western classical music traditionally splits music making into two distinctly separate jobs—composer and performer. The composer invents the ideas behind the music and the performer realizes them. Sometimes the composer and performer are the same person, sometimes they are separated by hundreds of years, but even across great distances of time and space the composer and performer can communicate with each other, through a series of written instructions, called a score. A score is a set of instructions, a rule book, a description of actions the composer proposes to the performer. We value composers by noticing what qualities of rules they invent; we value performers by noticing what they add to / change / emphasize / ignore in the following of those rules. They are two very different jobs. 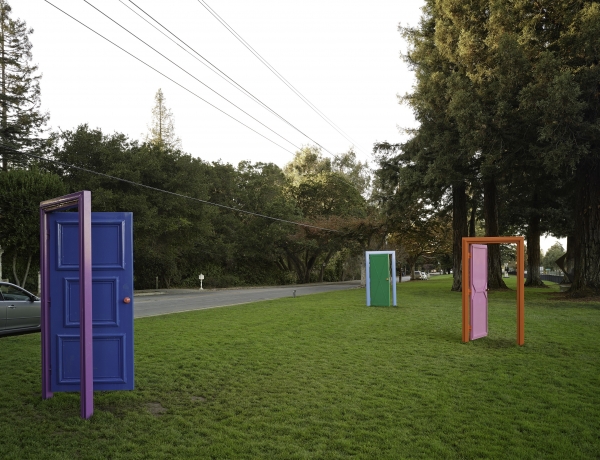 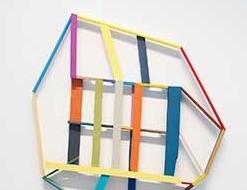 My Crippled Friend investigates the recent history of the intersection of painterly abstraction and the object. While “painting as object” has often been a formalist issue, the works in this exhibition gather their identity through the subversion of formalism—scrambling and reassembling themselves in an aesthetic shell game where the act of painting is always an investigation of a painting’s ability to push into objecthood.

More Love: Art, Politics and Sharing Since the 1990s

More Love gathers a diverse group of artists working in a range of media—video, photography, sculpture, sound, participatory art projects and choreographed events—to investigate how such an integral part of our everyday lives works. How are today’s ideas of relative truth and individual destiny, understood not just through the head but through the heart? What truth can be found in dialogue vs. hierarchy? What is the wisdom in love as opposed to our love of wisdom? This unique exhibition with new commissions and site-adapted installations brings together forty-five works by thirty artists. 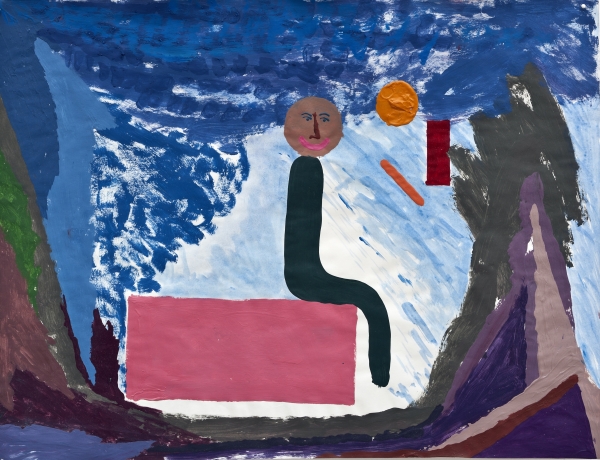 Chris Johanson at The Modern Institute 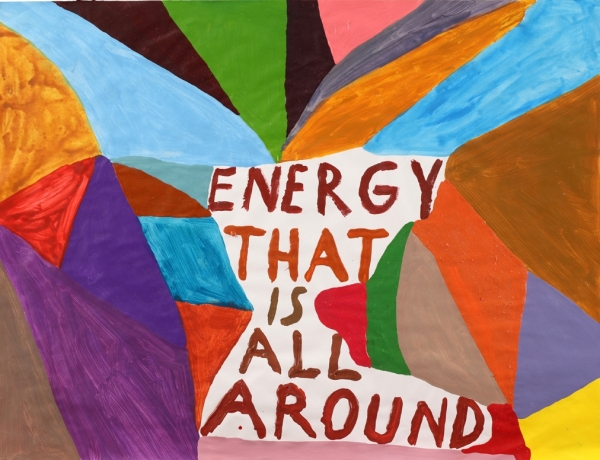 ENERGY THAT IS ALL AROUND

ENERGY THAT IS ALL AROUND features over 130 early and formative works by five artists—Chris Johanson, Margaret Kilgallen, Alicia McCarthy, Barry McGee, and Ruby Neri—who began their careers in the early 1990s in San Francisco’s Mission District and, by the early aughts, had been identified and celebrated as key members of the so-called Mission School. ENERGY THAT IS ALL AROUND will travel to Grey Art Gallery, New York University, April 15–July 12, 2014. 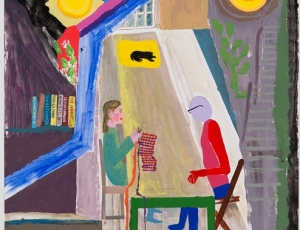 Within The River Of Time Is My Mind

Los Angeles—The Museum of Contemporary Art presents Within The River of Time Is My Mind, a new exhibition by Los Angeles-based artist Chris Johanson on view at MOCA Pacific Design Center from June 29 through September 22, 2013. Organized by guest curator Andrew Berardini, the exhibition features new paintings, sculpture, and found wood site-specific installation. Known for his figurative work that features text, the exhibition will highlight the kaleidoscopic color and angles that Johanson employs. 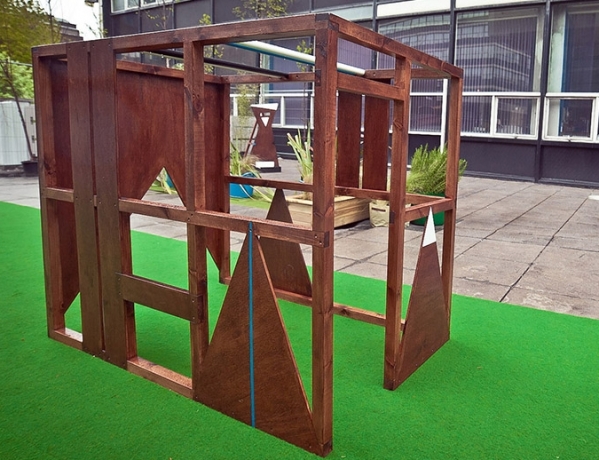 "Dialogue of Hands" will be a sculpture park for children and adults, located on the elevated ground level sculpture courtyard of the iconic 1964 building, formerly known as the College of Building and Printing (recently renamed City of Glasgow College). The exhibition would be an immersive sensory environment, with an emphasis on real time audience participation and attracting families with children. 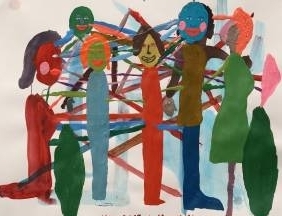 Chris Johanson will be featured in a solo exhibition at the Malmö Konsthall in Sweden. Alright Alright consists of new drawings, paintings and a large scale pyramid-shaped installation all made specifically for Malmö Konsthall. The installation includes eight sound pieces made by Johanson’s band IS. Chris Johanson (born 1968) is a self-taught product of San Francisco’s skateboard and graffiti culture. In his playful and humorous works he comments on what it is like to be human and live in today’s society. He works in widely varying media such as painting, film, installation and music. Johanson uses bright colors with a cartoon-like style. He is an acute observer, who in a simple and direct way conveys his observations to us. He still regards himself as somewhat of an outsider in the art world, and therefore does not feel bound by any pre-existing limitations. He enjoys exceeding boundaries – the paint spills outside his contour lines and the speech balloons are too small to contain his text. 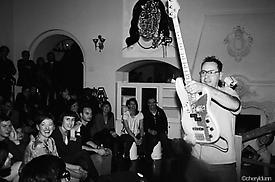 Chris Johanson will participate in the second edition of Art Basel's Art Parcours, a series of events and performances selected by Jens Hoffmann, Director of the CCA Wattis Institute, San Francisco. Johanson will perform with his band 'Sun Foot' atop his site-specific artwork, which takes the form of a stage built on a cargo barge docked on the bank of the Rhine. The event includes a projection by Johanna Jackson & DJ set by Christopher Garrett. Art Parcours is open to the public and free of charge. 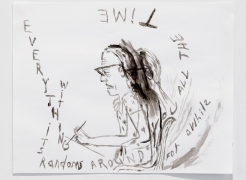 Press
Creativity in the Time of Quarantine
GQ May 14, 2020

What kind of work have you been making?
I’ve been making paintings on recycled canvas with as little paint as possible, focusing on calmness while I slowly paint. I try to gently let my life be what it is. Make room while I paint to process uncomfortable thoughts like dying or whatever heavy thought I might need to be with. 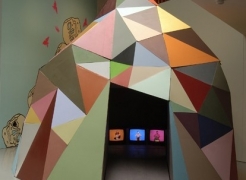 by SURFER
Artist Chris Johanson Is Building The Trippiest Boardshed You’ve Ever Seen At The Vans Us Open
SURFER July 24, 2019

There’s an artistic renaissance afoot at the Vans US Open of Surfing this year, and the ever-colorful Chris Johanson is building something awesomely weird right there on the sand. If you’ve paid any attention to the worlds of skateboarding or art over the past few decades, chances are Johanson’s work has struck you with its colorful and humorous tongue-in-cheek impressionism, which has graced the bottom of skateboards and the walls of prestigious galleries alike. 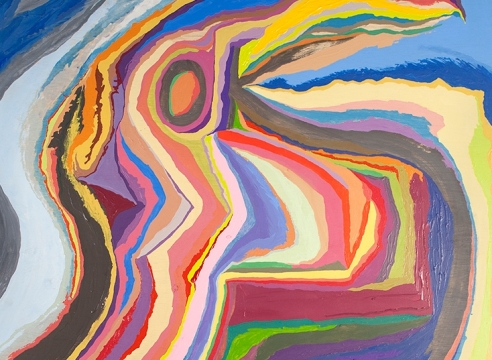 Mitchell-Innes & Nash recently debuted a new exhibit in Chelsea, Manhattan, on view from April 6 – May 13, 2017. Chris Johanson: Possibilities showcases new paintings and works on paper that invite you to physically interact with the art. 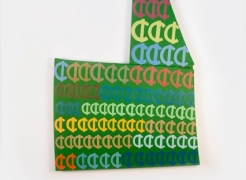 Possibilities, Johanson’s second solo exhibition at Mitchell-Innes & Nash introduces his whimsical and easy-going West Coast style that has become associated with Mission Art School. Cartoonish drawings, symbols from pop culture, and figures that morph into abstraction appear in bright, sunny colors often times accompanied by text. The artist, who went into the radar of New York art scene with his participation in the 2002 Whitney Biennial, uses different found material he finds on the street, paying homage to his early days as a street artist. 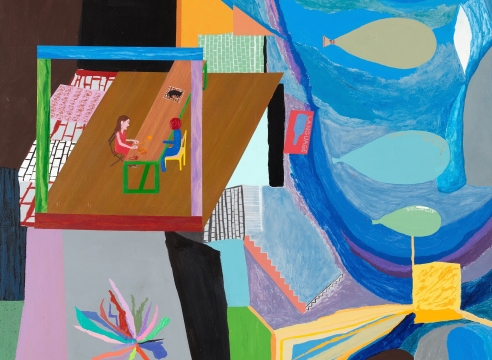 Chris Johanson: Possibilities is an exhibition of new paintings and works on paper on view in an immersive installation at the Mitchell-Innes & Nash’s Chelsea space. Johanson’s work engages with the meditative qualities of art-making and the sincere direct communication through painting and sculpture. 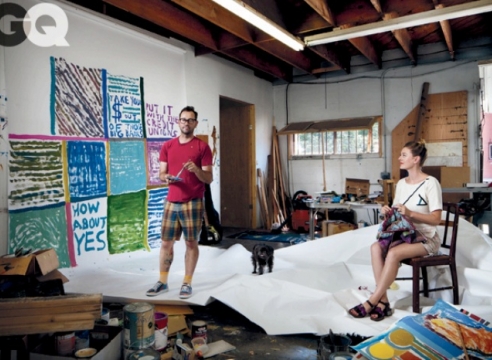 New Artist We Love
Chris Johanson
Started on the Street, Headed for the Met 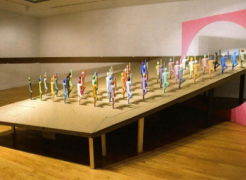 As the story goes, about 12,000 years ago human beings migrated to the West Coast of North America. They came from Siberia by way of the Bering land bridge and brought with them a system of spiritual beliefs based in rituals of astral projection, animal metamorphosis, and the healing séance. 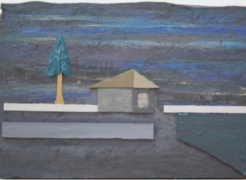 Artslant Backwards Towards the Future by Joel Kunnen Chris Johanson Kavi Gupta Gallery, September 10- October 16, 2010. Gallery season is now officially in full swing as witnessed by the glut of art kids and young professionals that swarmed the West Loop Gallery direct this past weekend. 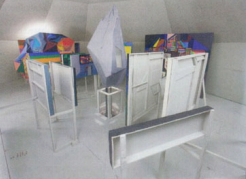 Compromising paintings and one large installation, Chris Johanson's second solo exhibition at this gallery was equal parts cryptic and clear-cut, lighthearted and sarcastic, comic and tragic. Most of the artist's new works employ a Crayola palette and are composed of wood he gathered from Brooklyn Dumpsters and discarded art-shipping crates. 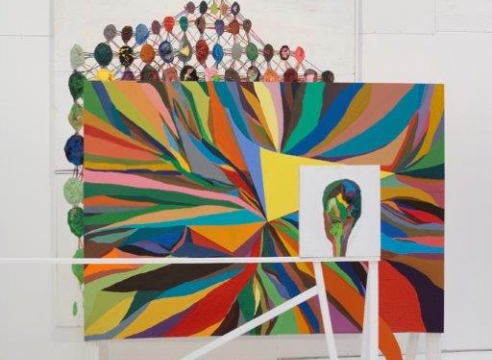 What does a painting have to apologize for? No answers but contrition aplenty, were at hand in Chris Johanson's installation "Totalities," which presented some three dozen acrylic-on-wood paintings, mounted on rough wooden supports and standing penitently in a circle around a slowly rotating, gray-painted plywood icon.