Over the past thirty years, Sadie Benning has been considered one of the most influential artists examining the relationships between identity and representation. Beginning in 1989 as a teenager with a series of powerful videos they have continued to create a poetically informed oeuvre spanning a variety of disciplines, including painting, sculpture, photography, sound and installation.

The head-sized panels are constructed of a wood substrate comprised of individually layered photographic transparencies and alternating pours of clear resin—each building up a deepened and dimensional space between the images. The transparencies within each panel originate from both analogue and digital source material—reworked and combined to generate new associative meanings. Within the process of image transferring, generation loss results to varying degrees— where the new version becomes hazy, abstracted, obscured or even illegible when compared to its original. It is in this murky low fi space that Pain Thing 2 locates its materials. Adding a painterly as well as sculptural quality to the photographic panels, the resin’s hybrid presence reflects Benning’s broader interest in exploring ambiguity and states of in-between-ness.

The title Pain Thing was initially conceived of as an inside joke on the word “pain-ting,” and the acknowledgment of an artist’s stereotypical anguish. But the title also encapsulates the often indescribable nature of trauma—how hard it can be to put into language or place in time—or to isolate in any way—the word “Thing” deliberately cryptic. The word “Thing” also pushes one to consider the consequences of objectification, how often trauma stems from being seen or treated as a “Thing,” and thus denied personhood. Pain Thing 2 continues to explore the cacophonous nature of memory while its title evokes the sequel to a horror film—the promise of frightening scenes with a narrative arc. But there is some irony to the title as well because of course trauma does not have a finite narrative arc. Trauma is passed down and shared, it cannot be extracted from the larger context of one’s life, and it persists. In this way, the show presents a sequel to a sensation that is ongoing—that never ends. 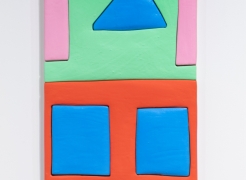 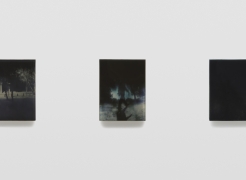