Mitchell-Innes & Nash is pleased to present the first solo exhibition of Jay DeFeo’s work in New York since the acclaimed Jay DeFeo: A Retrospective at the Whitney Museum of American Art in 2013. Assembling fifty key works spanning the years 1965–1989, the exhibit examines DeFeo’s distinctive exploration of visual vocabulary, rich materiality and experimental process across the media of painting, drawing, photography and rarely seen photocopy works.

DeFeo’s diverse and constantly evolving practice extended far beyond her seminal work The Rose (1958–66). Throughout her career, DeFeo consistently blurred the boundaries between abstraction and representation, transcending the identity of the common objects that fascinated her.

Moving seamlessly between painting, drawing and collage, DeFeo introduced photography into her oeuvre in 1970.  In the mid-1970s, the artist began using the photocopy machine as a new type of photographic lens through which she created series of works that defy an accepted understanding of the limitations of the photocopier.

As seen in large-scale works such as Tuxedo Junction (1965/1974), surface and texture are of paramount importance in her oeuvre, partly inspired by the crumbling facades found in Paris and Florence, where she traveled early in her career.  The densely layered surface of built-up oil paint in Tuxedo Junction is echoed decades later in the wrinkles of tissues pressed against the glass plate of the photocopier as DeFeo investigates texture in two and three dimensions.

This exhibition focuses on a handful of forms and objects that appear and reappear in her work: a torn fragment of a 1958 work titled White Spica, her camera tripod, a hybrid item created from an antique candlestick telephone, flowers, a generic tissue box, or a tiny ceramic cup. By continually returning to these motifs, DeFeo imbues seemingly ordinary objects with a heightened sense of ritualized creative process.  Artist Walead Beshty, who authored the essay for the exhibition’s illustrated catalogue, explains, “Just as the ritual object accrues meaning incrementally and over time through a repetitive process of investment and stewardship, DeFeo came to favor producing paintings through a process of slow accumulation in lieu of the explosive and loose gestural compositions that were common at the time.”

Beshty writes further that DeFeo’s object: “would appear in photographs of her home and studio, the images positioned uncomfortably between works of art, studies, and simple documentation, showing the object in its mundane existence, a nod to its modest belonging in the quotidian. Yet the object would also perform as a compositional element in some of these still lifes acting in the service of a picture rather than as its focus, reduced to schematic line and shape by the eye of the camera or the swipe of charcoal.  Its image would bounce from surface to surface, material to material, going dormant for a period only to return later.”


About Jay DeFeo
Jay DeFeo (1929–1989) grew up in the San Francisco Bay Area and attended the University of California, Berkeley, receiving her masters of fine arts degree in 1951. With a fellowship from the university, she traveled in Europe and North Africa in 1951 and 1952, creating her first body of mature works there. Returning in 1953, DeFeo became a pivotal figure in San Francisco’s historic community of artists, poets and jazz musicians. She began incorporating the dualities of representation and abstraction, organic rhythms and geometric form, refinement and expressionism that became distinguishing traits of her art. DeFeo worked with unorthodox materials to explore the broadest definitions of sculpture, drawing, collage and painting.

In 1958 DeFeo began working on The Rose, a monumental work created over eight years, with so much oil paint that she called it “a marriage between painting and sculpture.” In 1959 she had a major solo exhibition at the Dilexi Gallery in San Francisco and her art was included in Dorothy Miller’s momentous exhibition Sixteen Americans at the Museum of Modern Art in New York. Ferus Gallery in Los Angeles mounted her next solo exhibit in 1960.

After completing The Rose, DeFeo began investigating new materials and became deeply involved with photography and mixed media works, pursuing these in the 1970s. Often her subjects were favored domestic oddities, which she transformed into images that, in her words, “transcend the definition of the objects from which they are derived.”

In the 1980s, DeFeo returned to oil paint, while still continuing to mix and assemble materials in her work, creating large, glowing canvases and an expansive scope of works on paper. She accepted a teaching position at Mills College, where she became a tenured professor. DeFeo was diagnosed with cancer in the spring of 1988, but continued to work prolifically until just before her death on November 11, 1989, at the age of 60.

Join the "Jay DeFeo" conversation on social media by mentioning @miandn or @JayDeFeo and using the #JayDeFeo hashtag when posting.

A fully illustrated catalogue will be published to accompany the exhibition with an essay written by Walead Beshty titled “The Ritual of Everyday Life: On the Migrating Objects of Jay DeFeo”.  Beshty will give a walk-through of the exhibition on Saturday, May 3rd at 3 pm. 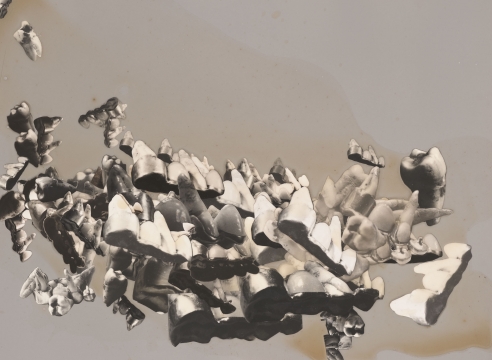 This exhibition--which focused on Jay DeFeo's production following her three-year hiatus from artmaking after her completion of The Rose, 1958-66, her famous, one-ton painting of a burst of white light--gathered forty-nine pieces from the last fifteen years of the artist's life, several of which were absent from her recent traveling US retrospective.  DeFeo, whos early work was animated by jazz and Beat subcultures and by the varied frequencies coursing through the San Francisco Renaissance, was also well known for her round-the-clock, sedulous-yet-playful ingenuity.  She worked quickly until the end; many of the pieces here were produced in the last four years of her life, the most industrious period of her career.

The Rose, DeFeo's sculpture-cum-painting over which she lavored for eight years, dominated discussions of her retrospective last year.  This show of drawings, photographs, and collages, free from the shadow of its myth, allows consideration of her wry improvisations and neo-Surrealist approach. 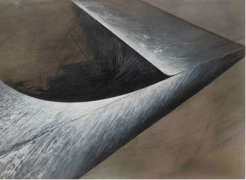 A riveting follow-up to last year’s Jay DeFeo retrospective at the Whitney Museum, this exhibition of drawings, photographs and photocopies finds this artist moving past her ponderous masterpiece, “The Rose,” in fits and starts. 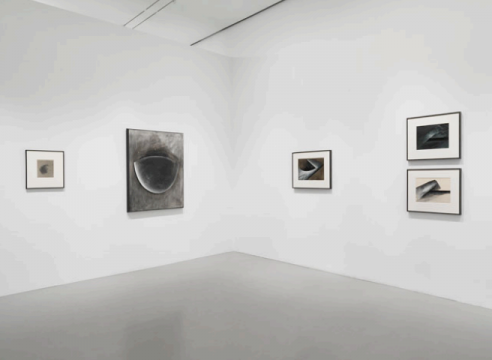 By Sarah Cowan
Searching for Jay DeFeo (Again)
Hyperallergic May 29, 2014

"That's why a show like the one currently up at Mitchell-Innes & Nash, which homes in on her post-“Rose” output until her death in 1989, is still direly important. The gallery curators have mined DeFeo’s archives to present works never before exhibited, including photographs, photocopies, and collages, next to more well-known pieces such as “Tuxedo Junction” (1965/1974) and “Seven Pillars of Wisdom No. 6” (1989). Laid out according to subject rather than chronology, the effect is that of a forensic case study, tracing a path from the everyday objects she called her “models” to her “portraits” — incisive studies she made across media — to her paintings, where the original subject is less abstracted than obscured by the history of her experimentation and transformations." 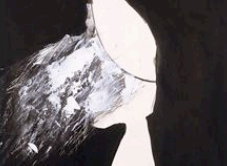 The Rose, DeFeo’s enormous sculpture-cum-painting over which she labored for eight years, dominated discussions of her Whitney retrospective last year. This show of 50 small-scale drawings, photographs and collages, free from the shadow of its myth, allows us to consider DeFeo’s wry improvisations and neo-Surrealist approach. An untitled photocollage c. 1975–76 sees a ghostly hand against a black background above an overflowing basket propped up by a silhouetted cutaway; the totem-like form makes the organic uncanny, which is one of the artist’s prevailing motifs. 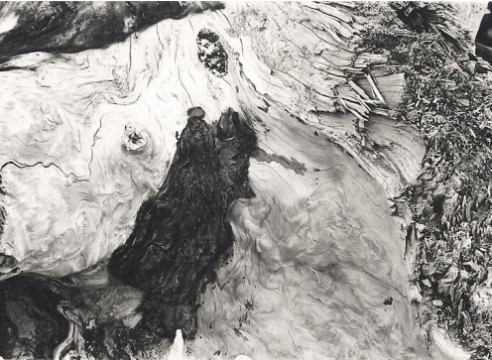 Mitchell-Innes & Nash, Jay DeFeo, closes June 7.
Long reduced to a footnote of 20th century art history, DeFeo (1929–1989), previously remembered largely for The Rose (1958–66), her monumental, massively thick relief painting, came roaring back into the public consciousness with her impressive 2012–13 retrospective at the San Francisco Museum of Modern Art and the Whitney Museum of American Art, New York. Her current show at Mitchell-Innes & Nash continues the trend with a selection of DeFeo’s 1970s experiments in photography, an assortment of drawings and collages, and her late-in-life return to oil painting. DeFeo’s distinctive exploration of form and repetition of shape, as well as her fascination with space and depth of field, are seen throughout the exhibition. Limited to a largely gray-scale palette, save for a few sepia-toned works, the show has Dadaist undertones, especially in DeFeo’s still life photography. De-contextualized close-ups of pedestrian items like a head of cauliflower or a kitschy seashell lighting fixture take on an unsettling, almost otherworldly quality, reminding the viewer of DeFeo’s uncanny ability to create the illusion of texture and three-dimensionality even in her flat works. 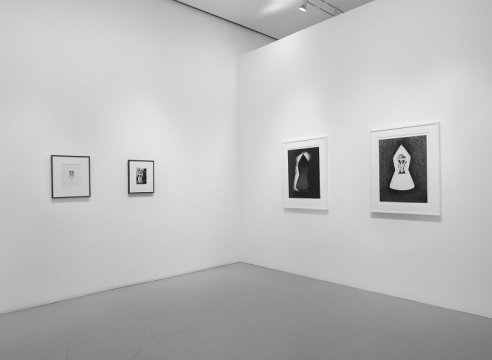 DeFeo (1929–1989) became legendary for her single-minded focus in creating The Rose, her monumental abstract canvas that took eight years to complete. This show, featuring paintings, works on paper and photos, is the first to exhibit her efforts since a 2013 Whitney retrospective. 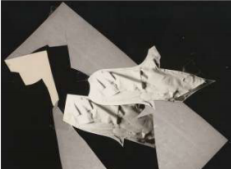 "It was such a brilliant, mind-blowing exhibition," says Lucy Mitchell-Innes of the Whitney's Museum of Amercan Art's lauded 2013 Jay DeFeo retrospective, "that we were quite intimidated to follow on that."  So, for the first presentation since the blockbuster of the late Bay Area artist's AbEx-tinged work at Mitchell-Innes & Nash in Chelsea, the dealer confides, "we had to develop another narrative that shows a different side of Jay."  For the show, running May 1 through June 7, she assembled nearly 50 collages, drawings, paintings, and photographs from the 1960s through the 1980s that reveal DeFeo's dogged ursuit of specific formal elements across media-say, the sculptural qualities of wadded Kleenex, in one surprisingly affecting group of photographs, photocopies, and paintings. "The way she would play around with scale, fragments would take on a life of their own," notes Mitchell-Innes.  And the way the works speak to one another, she says, demonstrates "the integrity of the vision, the consistency of it-and the intensity.  Emotionally, the work is just right out there." 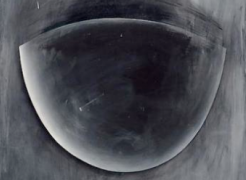 Blockbuster alert! Hot on the heels of the Whitneyʼs illuminating 2013 Jay DeFeo
(1929–89) retrospective, MIN is showing work from 1965 through the end of her
life. Forty-eight total pieces, folks: collage, painting, photography, photocopying(!)
and more. Not to be missed. (Pictured in the slide show is 1972's White Shadow.) 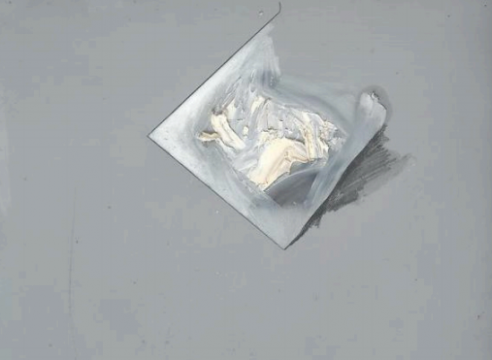 Last year’s Jay DeFeo retrospective at the Whitney Museum confirmed the Bay Area artist, who lived from 1929 to 1989, as one of postwar America’s great, unsung artistic figures. Known pretty much solely for The Rose, the sizable masterwork of a painting she labored on for eight years, from 1958 through 1966, it was revealed that she also produced spooky, spectral drawings and photographs. This will be the DeFeo Trust's first show with the gallery, and will focus on works from the 1970s and '80s, including never-before-shown photocopy works. Walead Beshty will contribute a catalogue essay.